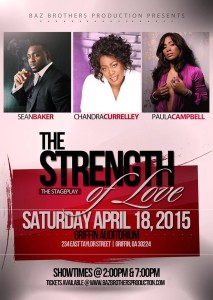 “The Strength of Love” is a heartfelt story of Antonio and Melody, a loving couple who have been married 5 years. Although the first 5 years were blissful, Antonio and Melody are now settling into a new stage of marriage, and each has their own struggle. Melody is starting to question her husband’s love for her, while Antonio deals with a new reality, as he learns that his wife cannot provide his lifelong desire. So they are now faced with the dilemma of “should I stay or should I go?” Find out if the “Strength of Love” will conquer all…

“The Strength of Love” features a cast of incredible talent, starring Sean Baker, Paula Campbell and legendary jazz singer and actress Chandra Currelley. Sean Baker, who plays Antonio, is an actor, singer, songwriter and producer, who hails from the Bronx, NY and currently resides in Atlanta, GA. He has starred in Lorraine Hansberry’s “A Raisin in the Sun”, Mary Morrison’s “Single Husbands” and Kandi Burruss’ “A Mother’s Love.” He has also appeared in films including “Taken 3”, “Triple 9” and Oprah Winfrey’s “Selma.”

Paula Campbell is a talented songstress from Baltimore, MD who has served as the opening acts for top artists such as Ne-Yo, Tre Songs, Ciara, Rihanna, Kanye West and T.I. She has been a signed artist for Sony Urban and Columbia Records and has also independently released billboard charting singles and LPs. She has been seen in music videos for Jamie Foxx and John Legend, commercials and TV shows ‘Constantine’ and ‘Resurrection’. She had a role in the HBO International Latino Film Festival’s ‘Best Movie’ Inside a Change, and had a lead role in the theatrical production “Can a Good Woman Change a Bad Man.” In addition to acting and singing, Paula is a gifted dancer, songwriter, arranger, painter and spoken word artist.

Legendary Jazz, R&B and Gospel artist and actress Chandra Currelley plays Melody’s mother in the play. Chandra Currelley, who also starred in “A Mother’s Love”, is best known for her various roles in Tyler Perry productions “Diary of a Mad Black Woman”, “Madea’s Big Happy Family” and TBS’s “For Better or Worse.” As the former lead singer for the popular recording group, the S.O.S. Band, Chandra is the 2014 recipient of the Lady of Soul Jazz award. A Gospel Choice award nominee, Chandra has performed at the White House and toured the US, Europe and Asia. Her theatrical performances span several years and productions, including “Jesus Christ Superstar Gospel”, “What’s Done in the Dark” and “Rejoice” with Kenny Leon. Her performances have been seen at the Alliance Theatre, Fox Theatre and several others in
the Atlanta area and around the country.

“The Strength of Love” is the latest stageplay from the Baz Brothers Production company. Baz Brothers recently debuted their latest movie release entitled, “Love N Success” starring Angie Stone, now in television production. Other stageplays previously produced include “Broken and Bitter” (now in movie production), “No Limits” and “Choices” and the webseries “Only God Can Judge Me”, which became the official selection of the Kingdomwood Christian Film Festival in 2011. Upcoming projects also include the production “Boundaries.”

Baz Brothers Production is an independent production company based out of Atlanta and New York.

Created by Jeff and Kendrick Bazile in 2003, their mission is to bring the best and most creative stories to the masses by writing, directing and producing quality work. Jeff Bazile, is a writer, director and co-owner of Baz Brothers Production. Hailing from New York, he started his career in film at age 16, studying film production and acting. He has a MBA in human resources and project management and has over 10 years’ experience writing, directing and producing films. His wife Maria has co-written, co-produced and serves as the production manager for many of the BBP projects. She has a Master’s degree in Leadership and has
several years’ experience in theatre, modeling, acting, makeup, PR, advertising and event planning. She plays a huge role in casting, coordinating premiers and managing the overall business.

Jeff, Maria and the cast can be heard promoting the play in interviews on Love860AM, Source B Radio on BlogTalk, Sean Pryme Show on Sensation Station Network and Urban Grandstand and ImagineI Magazines. Their commercial is on WIGO AM1570, and the station is also running a contest to give away tickets to the play. Connect with Baz Brothers Production on social media at https://www.facebook.com/BazBrothersProd and https://twitter.com/bazbrothers.

“The Strength of Love” premiers at the Griffin Auditorium at 234 East Taylor Street Griffin, GA 30224 on Saturday, April 18, 2015 with two shows at 2pm and 7pm EST. Tickets are available at
www.bazbrothersproduction.com or on EventBrite.