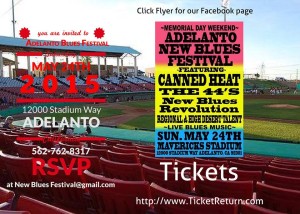 The legendary Canned Heat is the main headliner, supported by a stellar bands lineup that includes SoCal blues staples The 44’s, Mighty Mojo Prophets, Boxcar 7, New Blues Revolution and the George Foster Band; as well as popular High Desert-based acts The Blue Henrys, Victor Crain West Coast Project, and DJ Parker. Other acts may be added as the Festival date approaches. Either way- it’s a superb entertainment value for only $30.!

With seating for almost 4,000 people, the oval-shaped Stater Bros. Stadium & Heritage Field (home of the Mavericks Class A baseball team) provides superb sight-lines and great acoustics from virtually every seat in the house. Stater Bros. Stadium is conveniently located off the I-!5 Freeway, at the intersection of 395 Freeway and Stadium Way, and is an integral part of the rapidly-growing Victor Valley metro area, whose combined cities population is approximately 450,000. Adelanto New Blues Festival concertgoers can look forward to enjoying first-class blues music in a relaxed atmosphere, with parking literally at the front gate.

One of the great blues/rock bands of the last fifty years, Canned Heat, headlines the Adelanto High Desert New Blues Festival at Mavericks Stadium in Adelanto on Sunday, May 24.

Canned Heat: Known for all-time hits “On The Road Again,” “Let’s Work Together” and “Going Up The Country,” the seminal band first formed in 1966 and continue touring to this day. Formed in 1966, Canned Heat was formed by blues historians/record collectors Alan “Blind Owl” Wilson and Bob “The Bear” Hite. Hite took the name “Canned Heat” from a 1928 recording by Tommy Johnson. They secured their place in rock ‘n’ roll history with a performance at the 1967 Monterey Pop Festival and the headlining slot at the original Woodstock Festival in 1969 (“Going up The Country” was adopted as the unofficial theme song for the film “Woodstock” and the Woodstock Generation). More than fifty years later and with thirty-eight albums to their credit, Canned Heat is still going strong. They’ve been anchored the past forty-five years by the steady hand of drummer/bandleader Adolfo “Fito” de la Parra. Joining Fito is original bassist Larry “The Mole” Taylor and new Orleans legend, Dale Spaulding on harmonica, guitar, and lead vocals. Chicago great Harvey Mandel is the regular guitarist but has been temporarily replaced by John “JP” Paulus while “The Snake” deals with his health issues. www.cannedheatmusic.com.

The 44’s: This Los Angeles-based band is one the bright rising stars on the American blues-roots scene. The raw, rough and tough sounds generated by these four musicians during live performances demands to be heard by blues music fans worldwide. They evidence a genuine gift for creating blues in the moment, while at the same time showing loyalty to a remarkable blues-and-r&b tradition that goes back decades, from the James Harman Band and the Red Devils to storied greats like Howlin’ Wolf, Albert Collins, and Muddy Waters. Their first release Boogie Disease was self-produced for $800 with the help of guitar great Kid Ramos and was quickly released on Rip Cat Records,peaking at #12 on the Living Blues radio charts and #2 on B.B. King Bluesville Sirius/XM Satellite Radio. Johnny Main grounds his outstanding singing and guitar playing in real experience, his talents as honest as the day is long. Bassist Mike Hightower brings many years of experience to hold down the bottom end with some greasy glue. Drummer J. R. Lozano, behind his vintage Ludwig kit, is as solid as any you’ll hear, calibrating rhythmic flow with alertness and intelligence. Their latest addition, harpist Jacob Huffman, adds excitement and energy in the West Coast style that he learned from his mentor, Rod Piazza. Their sophomore release is Americana (Rip Cat Records). http://www.the44sbluesband.com/.

Mighty Mojo Prophets: Formed in late 2007 by vocalist Tom “Big Son” Eliff and guitarist Mitch “Da Switch” Dow, the Long Beach-based band lays down some of the most honest, straight-ahead blues you’re likely to hear. Their 2011 self-titled national debut for Rip Cat Records landed them a 2012 Blues Music Award nomination for “Best New Artist Debut.” The group’s follow-up effort, Flyin’ Home From Memphis continues the tale with thirteen skillfully written and wonderfully performed songs. Together they’ve summoned a veritable bevy of musical variations beyond their adopted West Coast roots to incorporate other regional styles such as Chicago and Texas blues, Memphis soul, country blues and proto-rock ‘n’ roll. This collection stands out as a refreshingly original take on traditional roots styles in a sea of ‘the same ol’ thing’. https://www.facebook.com/pages/The-Mighty-Mojo-Prophets/137073739704626?fref=ts.

The Blue Henrys: These High Desert favorites put their own twist on Chicago blues well-knowns such as Muddy Waters, Howlin’ Wolf, Willie Dixon, Freddie King, Little Walter and Junior Wells, to name a few. Not only do they entertain with great arrangements of blues and rock legends; their own songwriting and arranging hits the mark in a big way – with tunes like “She’s Still Lovin’ Me”, “Change His Mind” and “Always In My Heart” among the crowd favorites wherever they play. The addition of a small but mighty horn section enables them to explore the ‘Jump Blues’ sound. The fun factor is always high when The Blue Henrys kick it into gear! https://www.facebook.com/pages/The-Blue-Henrys/159432964135125.