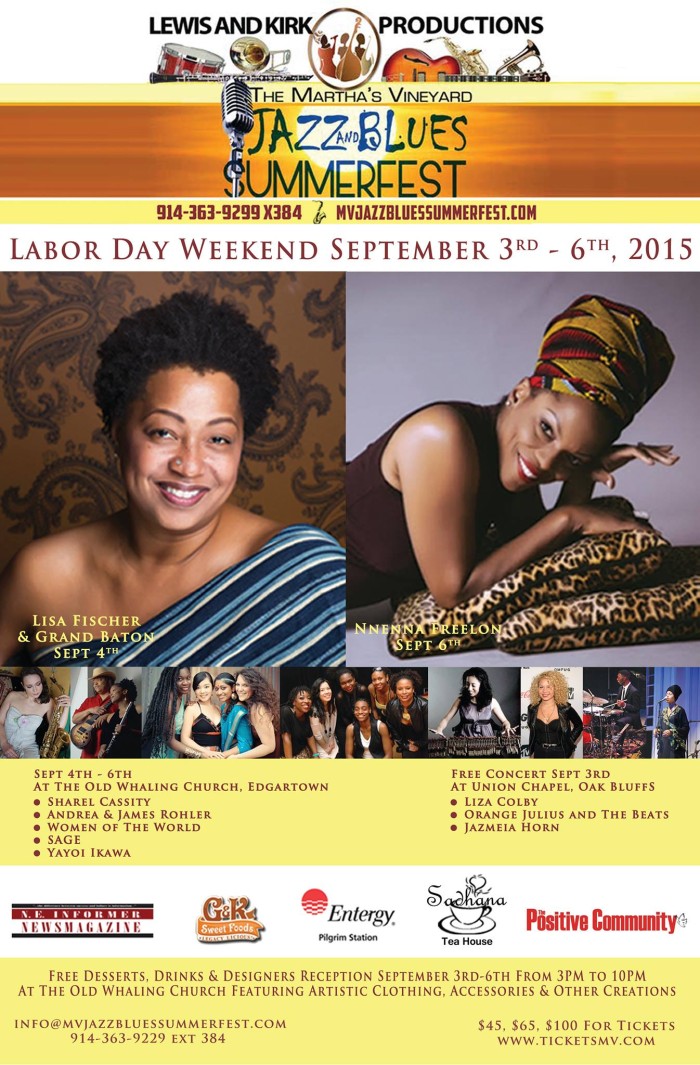 Ms. Lisa Fischer & Grand Baton appear on Friday, September 4 and Nnenna Freelon on Sunday, September 6. “The music of these brilliant women takes you on a journey through song that causes the spirit to soar, the senses to smile and the surroundings to shine,” said Sheila Baptista, CEO and President of Lewis and Kirk Expeditions.

This is Fischer’s debut appearance at Summerfest. Winner of the Grammy for Best Female R&B Performance for “How Can I Ease the Pain,” Fischer has a multi-octave voice that when coupled with the outstanding musicians in Grand Baton, guarantees that the audience will be on its collective feet throughout the evening. With her astonishing range, spot-on intonation and a mastery of the stage, Fischer is sought out as a headliner for jazz festivals throughout the world. Fischer, who regularly tours and records with Beyoncé, The Rolling Stones, Sting and Chris Botti among others, is featured in the Oscar and Grammy-winning 2013 documentary “Twenty Feet from Stardom.”

Freelon is also making her Summerfest debut. Her appearance is almost a trip home for the Six-time Grammy Award nominee. Born and raised in Cambridge, Massachusetts, she is a graduate of Simmons College in Boston. Freelon has a well-deserved reputation as a compelling and captivating live performer. In 2014, she starred in the critically acclaimed show “Georgia on My Mind: Celebrating the Music of Ray Charles” at The Venetian Las Vegas hotel. No stranger to Charles’ music, Freelon toured with him, Al Jarreau and George Benson among others. She won the Billie Holiday Award from France’s Academie du Jazz and the Eubie Blake Award from the Cultural Crossroads Center in NYC.

The music moves to the Old Whaling Church, 89 Main Street, Edgartown, on Friday, Sept. 4, Saturday, Sept. 5 and Sunday, Sept. 6. Doors open at 6:00pm, show time is 6:30pm. In addition to Ms. Lisa Fischer & Grand Baton, Friday’s show includes Sharel Cassity, voted ‘Rising Star Alto Saxophone’ in the Downbeat Magazine Critics Poll, and Andrea and James Rohlehr and the AndJam Band, the dynamic husband and wife songwriting and performing duo. Saturday’s show is headlined by Women of the World, a Boston-based collective of women musicians hailing from Japan, India, Italy, Haiti, Mexico, and the United States. The core singers and their eclectic band perform original and traditional folk music in over 17 languages from across the globe and have performed with the Boston Pops Orchestra. Saturday will also feature Sage, the all-female jazz and blues vocal and instrumental ensemble that performed at the 2009 and 2013 Presidential Inaugural Balls for President Barack Obama and Major League Baseball All-Star Games among other major venues. In addition to Freelon, Sunday’s show features jazz pianist phenom Yayoi Ikawa, who has performed with Reggie Workman and Howard Johnson among others, and jazz and gospel blending musician Kersten Stevens, the Queen of the Sacred Violin.

Back by popular demand is the “Designers, Desserts and Drinks Reception,” which features vendors selling beautifully handcrafted and uniquely designed clothing, jewelry and art creations, along with some surprises, at the Old Whaling Church in The Bailey Room from 3:00pm to 10:00pm each day of the concerts. The reception is free and open to the public.

A portion of the proceeds from Summerfest will benefit regional breast cancer networks and other local organizations assisting women who are receiving cancer treatments.

The festival is designed to celebrate women in the jazz, blues and contemporary arts and support breast cancer treatment initiatives.

Lewis and Kirk is an unlimited music enterprise, focusing on women’s ensembles in jazz, blues and gospel, engaging in the provision of professional music and entertainment services throughout the United States and abroad. The talented musicians and vocalists in the Lewis & Kirk family represents the finest in the performing arts and always endeavors to deliver an outstanding performance in any venue.