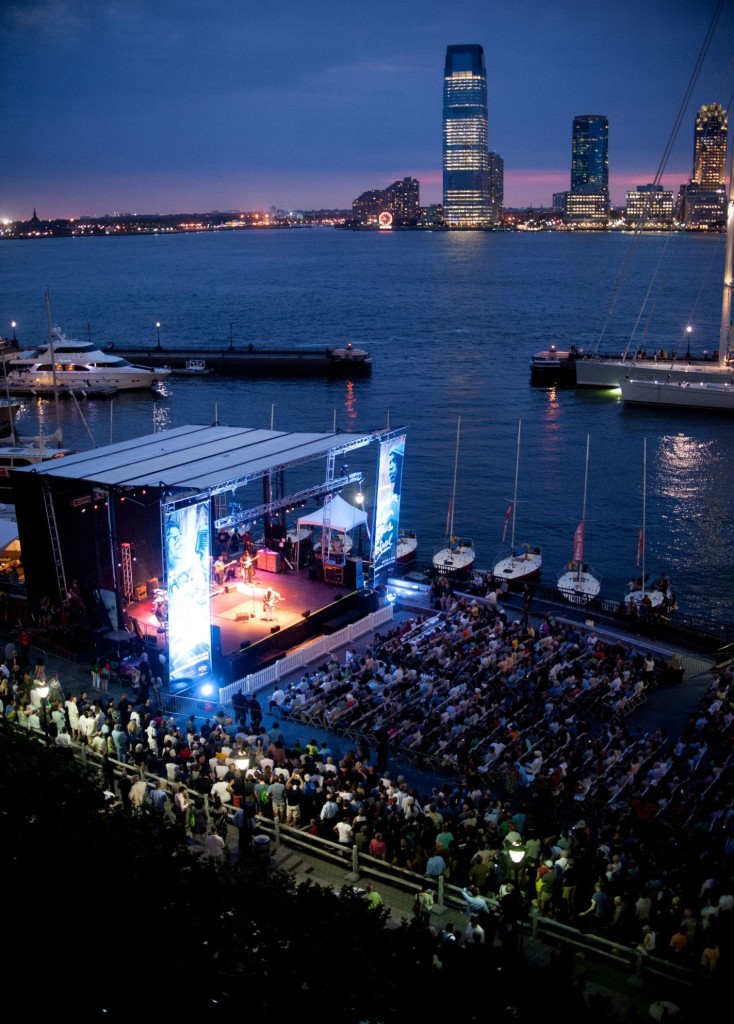 New York, NY (May 7, 2014) – Arts Brookfield’s annual free summer music festival on the Lower Manhattan waterfront will celebrate its fifth anniversary on July 14th and 15th by expanding its signature blues lineup to include favorites from the rock, roots, and Americana scenes, organizers announced today.

Taking place at the Brookfield Place Waterfront Plaza alongside the Hudson River, the Lowdown Hudson Music Fest will kick off on July 14th with O.A.R., whose reggae-inflected roots rock has earned them international stardom, and acclaimed singer-songwriter Ryan Bingham.

The second night of the festival (July 15th) will spotlight improvisational gospel-jazz supergroup The Word, with roots rockers The Wood Brothers opening the show. Both bands feature members of the acclaimed jazz trio Medeski Martin & Wood.

“We are excited to introduce our audiences to an expanded version of what has quickly become one of the city’s most beloved music festivals,” said Debra Simon, vice president and artistic director, Arts Brookfield. “In addition to showcasing amazing blues artists, The Lowdown Hudson Music Fest will now bring some of the best rock, roots, and Americana acts to the stunning Waterfront Plaza at Brookfield Place.”

The full lineup for the 2015 Lowdown Hudson Music Fest is as follows:

O.A.R. – Formed in 1996 in Rockville, Maryland, O.A.R. (an acronym for Of a Revolution) enjoyed a quick rise from college campus favorites to Billboard chart-toppers and international stars. Renowned for their vibrant live shows and the communal relationship they share with their fans, the band have performed their roots-rock and reggae-inflected songs to audiences around the world, including two sold out shows at Madison Square Garden. They recently returned to their hometown for their eighth studio album, The Rockville LP, a journey of creative renewal and inspiration.

Ryan Bingham – is a celebrated Americana singer-songwriter who first captured worldwide attention for his collaboration with producer T Bone Burnett on the soundtrack for the 2009 acclaimed film Crazy Heart, including co-writing & performing the film’s award-winning theme song “The Weary Kind”. The title track earned Bingham an Academy Award, Golden Globe Award, and Critics’ Choice Award for “Best Song” in 2010, as well as a Grammy Award for “Best Song Written for a Motion Picture, Television or Other Visual Media” in 2011. Bingham released his fifth studio album “Fear and Saturday Night” on January 20, 2015.

The Wood Brothers – Chris and Oliver wood spent fifteen years separately pursuing successful music careers before they formed The Wood Brothers: Chris as a founding member of genre-busting jazz trio Medeski Martin & Wood while Oliver immersed himself in the Southern Rock scene working with Tinsley Ellis and King Johnson. NPR described their first album as a collection of “gracious little songs [that] sound like they were born on a front porch during a beautiful sunset.” Their music combines blues, folk, and roots-music styles they loved as kids into their own evocative sound, with their voices united in the kind of high-lonesome harmony blend for which sibling singers are often renowned. On their latest album, The Muse, Oliver’s gritty acoustic guitar and Chris’s virtuosic upright bass are joined by multi-instrumentalist Jano Rix.

The Word – The Word is an improvisational rock-gospel supergroup featuring pedal-steel guitarist Robert Randolph, keyboardist John Medeski, and all three members of the North Mississippi Allstars (guitarist Luther Dickinson, drummer Cody Dickinson and bassist Chris Chew). The band came together in 2000, bonding over their mutual love for Sacred Steel, a tradition of gospel music that originated in African-American Pentecostal churches in the early 20th century. Since the release of their first LP in 2001, all five members have remained busy with projects outside of the band while occasionally uniting for live shows, including high-profile performances at Bonnaroo in 2005 and 2012. May 4 marked the release of their second studio album, Soul Food, on Vanguard Records.