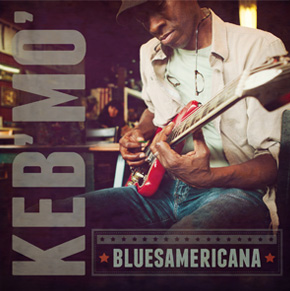 On the heels of his success, Keb’ and his three-piece band will take their routinely sold out show to fans across North America for a 2015 Summer Tour, which will launch on June 18 and continue well into the fall.

When asked, Keb’ said, “I’m having more fun on the road maybe more than ever before. The talent of my team and band and the gratitude I have for people that continue to come out to see me, sometimes for the 10th or 15th time . . . it’s overwhelming.”

Dates for Keb’ Mo’s forthcoming tour are as follows:

Prior to his stateside tour, Keb’ Mo’ and his band will make a special one-time only appearance opening for Robert Plant and the Sensational Space Shifters at Mud Island Amphitheatre in Memphis, TN on Friday June 12 and on June 14, he and his band will headline The Samsung Blues Festival in Sao Paulo, Brazil.

Zac Brown Band’s April 28th chart topping and eclectic release, Jekyll + Hyde, contains a song called “Remedy,” which was co-written by Keb’ Mo’ and his contribution “To The Work,” is featured on Orthophonic Joy, a collection of artists paying tribute to the legendary 1927 Bristol Sessions. The two-disc set was released on May 12, and features Keb’ Mo’ along with Brad Paisley, Carl Jackson, Dolly Parton, Emmylou Harris, Marty Stuart, Sheryl Crow, Steve Martin & the Steep Canyon Rangers, Vince Gill and many more.

Additionally, Keb’ Mo’ was honored to help launch the Americana Music Triangle at The Franklin Theatre this past May. The Triangle, which has been in the works for more than three years, is a multi-state project, designed to promote a 1,500 mile stretch of highway that birthed nine uniquely American genres of music — Blues, Jazz, Country, Rock ‘n’ Roll, R&B/Soul, Gospel, Southern Gospel, Cajun/Zydeco and Bluegrass. Keb’ Mo’ appeared and performed at the launch party, which was attended by Governor Haslam and other dignitaries and music executives.