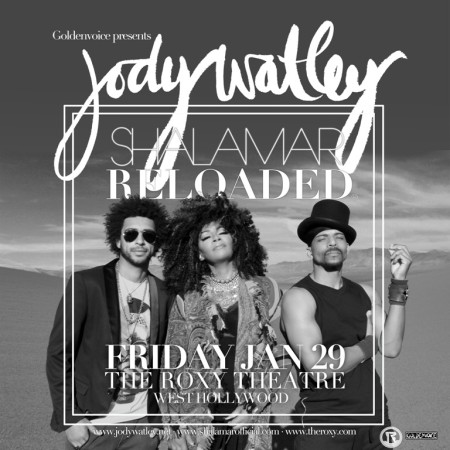 Grammy winning artist Jody Watley and her dynamic new group Shalamar Reloaded are set to make their debut appearance in Los Angeles at the legendary The Roxy Theater on January 29, 2016 presented by Goldenvoice and AEGLive

“There was a fist fight in the dressing room in the early days of Shalamar when we played here.” Watley laughs. “I’m looking forward to a new fun experience. It’s the first place I saw Prince as well..and so it’s cool to give Nate and Rosero this opportunity. It’s also the day before my birthday which will make it even more special.” This will be Watley’s first full major live concert in Los Angeles since The Wiltern Theatre in 1989.

In 2015 Jody Watley and the newly formed trio toured America, Japan, Amsterdam and Sao Paulo as well as performing at high profile festival dates in the U.K. including Let’s Rock London. Watley sprinkles the hit packed double sets (first half Shalamar Reloaded, second half Jody Watley) with cuts from her critically acclaimed ‘PARADISE.’ The concert takes you on a journey from disco, R&B, Pop, Hip Hop, Ambient Electronica and dance music. All 3 members dance which makes the show a nonstop party.

“PARADISE” which featured the Top 5 disco soul “Nightlife” is set to be re-released in conjunction with The Roxy date. The current ‘DANCER’ Remixed takes Jody back to her dance roots, featuring some of the best street style dancers in Los Angeles, as well a the youngest dancer 7 year old Jaxson whose parents drove him down from Utah make his first video appearance. The concept dance video directed by Rosero Inc. and released just before Christmas has gone viral generating over 300K views from Facebook alone.

Shalamar Reloaded released the contemporary R&B burner “SlowDance” single and video now available via The Spectra Music Group. The group is set to release their second single “O.R.I.G.IN.A.L” to take on internet trolls and haters. “It’s a topic that needs to be covered, online bullies and trolls,” Watley says. “I’ve been the target of a lot of it the past year. We want to partner with an organization that works against bullying online and off. It’s out of control…