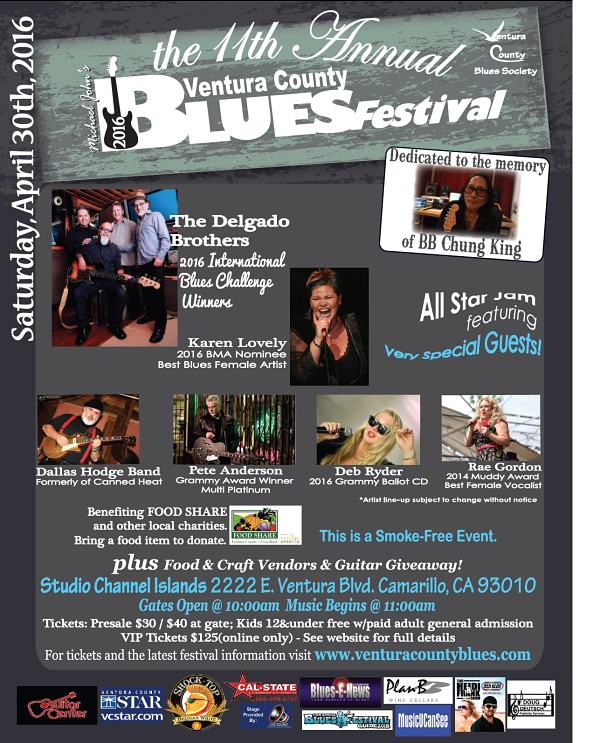 “We’re really excited about the Festival’s new location this year, and being able to have The Delgado Brothers perform, fresh from their recent IBC victory”, says Michael John, Ventura County Blues Society President. “The jam (for the late) BB Chung King at the end of the Festival will also be amazing. Looks like all of BB’s former band-mates and some very special guests will be there to honor BB’s memory”. 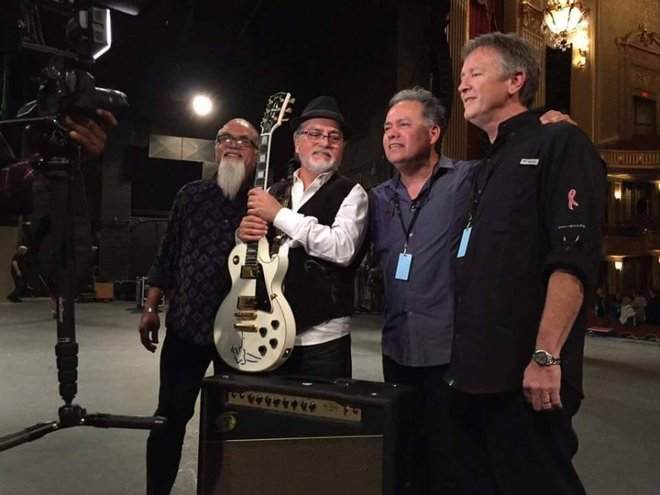 The Delgado Brothers (pictured recently in Memphis, TN after winning the 2016 IBC award for “Best Band”), perform as part of the 11th Annual Ventura County Blues Festival on Saturday, April 30 in Camarillo.

All-Star Jam Session: A star-studded lineup of musicians will take the stage to close out this year’s Festival, all to honor the memory of the late guitarist, BB Chung King. This is sure to bring down the house!

Delgado Brothers: No longer just “L.A.’s Best-Kept Secret” after winning the coveted 2016 IBC “Best Band” award, The Delgado Brothers are driven by fierce independence, unified by family, and fortified by the brotherhood of music. Their topical anthem-worthy songs are complemented by call-to-action lyrics, and East L.A. Soul. For over thirty years the Delgado Brothers have been music makers, collaborators and ordinary citizens; raising children, grieving the loss of parents, marrying & divorcing. All of this life experience may explain their flare for illuminating every-man’s joys, sorrows, triumphs and losses. The Brothers’ music has long been embraced both locally and globally by a wide spectrum of people undivided by culture, age or socio/economic status. delgadobrothers.com/.

Karen Lovely: Powerhouse vocalist and 2016 BMA (Blues Music Awards) “Best Blues Female Artist” nominee makes her Ventura County Blues Festival debut. Known for her passionate, driven performances, Karen delivers a blistering mix of contemporary & old school blues. Lovely’s standout performances have garnered awards and critical acclaim at festivals and venues throughout the US, Canada and Europe. With the release of her latest album TEN MILES OF BAD ROAD, Karen Lovely has established herself as a singer/songwriter with a style uniquely her own. karenlovely.com/.

Pete Anderson: Multi-platinum, Grammy Award-winning producer and ground-breaking guitarist who melds blues and country to forge a style all his own. Long considered one of the world’s best-of-the-best Tele-twangers, Anderson has never been satisfied with maintaining the status quo. The last ten years have found Anderson focusing on his solo career – perfecting his craft and honing his musical vision. On BIRDS ABOVE GUITARLAND the Detroit native delivers a set of rich roots music gumbo, blues/funk/swing/country twang with a splash of surf music and a dash of jazz. While Anderson’s work as a producer/arranger/guitarist has resulted in acclaimed records in the Country, Folk, Singer-Songwriter, Rock, Pop, R&B, and Red Dirt genres of music, his focus as a solo artist has always been his first musical love – The Blues. peteanderson.com/.

Deb Ryder: Widely regarded as one of the best up-and-coming singer/songwriters in the blues world today. Born outside Chicago, Ryder was influenced at an early age by the music of the city, and by her father, a Chicago club sensation. She began appearing onstage as a young teen at her stepfather’s famous Southern California-based nightclub The Topanga Corral, where she opened for blues legends like Etta James, Big Joe Turner and Taj Mahal, to name a few. Ryder’s latest album Let It Rain, produced by Grammy award-winning producer Tony Braunagel, features eleven Ryder originals and an A-List of renowned players in the genre who bring a fresh energy and a powerful sound. debryder.com/.

Rae Gordon: The Rae Gordon Band brings together award-winning and nominated musicians and is fronted by Rae Gordon, the 2014 Muddy Award Winner for Best Female Vocalist (Cascade Blues Association). Gordon and company have played the big and little stages of the Northwest’s favorite clubs, dance floors and festivals, helping to mold their signature sound that spans from a danceable get-up-and-groove to a haunting slide tone – the latter a sound that will make you want to find a back porch and sit a spell. Rae Gordon Band performances are not only a show, but a celebration, as Gordon follows the policy that a stranger is just a friend you haven’t met…yet. “Add equal parts of Janis Joplin’s pain, Aretha Franklin’s soul and Grace Slick’s power; mix them thoroughly, and add a big gob of gooey molasses and you have Rae Gordon’s voice”– Positively Entertainment and Dining. raegordon.com/.