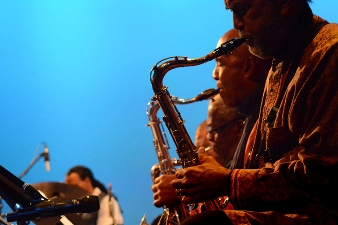 This year’s annual John Coltrane Memorial Concert (est. July 17, 1977) provides an exploration of some of the ballads and blues compositions of Coltrane, whose accomplishments as a composer are oftentimes overshadowed due to his tremendous legacy as an acclaimed, explosive and brilliant improviser. “An Evening of Ballads & Blues” timing couldn’t be better, with this year’s tribute providing an opportunity for performers to come together and breathe new life into some of the signature songs and melodies of Coltrane’s majestic legacy. It is also significant that September 23, 2016 marks the 90th anniversary of the great musician’s birth and this year’s JCMC at Northeastern University is the 30th anniversary of this unique collaboration between creative performing artists and a major institution of higher education.

The performance repertoire will feature ballad compositions chosen from such masterpieces as “Naima”, “Crescent”, “Lonnie’s Lament,” and “Dear Lord.” Blues compositions will include “Blues Minor,” “Mr. Day” and “Blue Train.” All these Coltrane works will be presented in new arrangements showcasing the ensemble’s great musicianship, prowess and flexibility.

Eric Jackson, hailed as the”dean of Boston jazz radio”and recognized nationally, will serve as host for the evening, which this year is being co-presented by Friends of John Coltrane Memorial Concert (fJCMC) in collaboration with the following divisionsat Northeastern University: Center for the Arts, Office of City & Community Affairs, Music Department, and Global Studies Department.

The John Coltrane Memorial Concert is co-produced by Leonard Brown and Emmett G. Price III. Further information on this year’s concert, as well as a detailed history of the JCMC, can be found at www.friendsofjcmc.org (http://friendsofjcmc.org/).

Brief historical background:
John Coltrane Memorial Concert originated in 1977 at the Friends of Great Black Music Loft near Boston’s Chinatown area. Over the last 39 years, the JCMC has earned its reputation as being Boston’s annual “rite of fall,” by keeping true to Coltrane’s desire to be “a force for good” and using his musical gifts to make the world a better place for all people.

Since its inception, the JCMC has reached over 30,000 audience members, many of whom return every year. It is common knowledge that the JCMC audience is one of the most diverse of any of the major cultural performance events in the New England area and the John Coltrane Memorial Concerthas grown to be one of the hallmark musical events in the Greater Boston area.

“I want to be a force for real good.
In other words, I know there are bad forces,
forces put here that bring suffering to others
and misery to the world, but I want to be the force
that is truly for good.”
(John Coltrane, 1966)