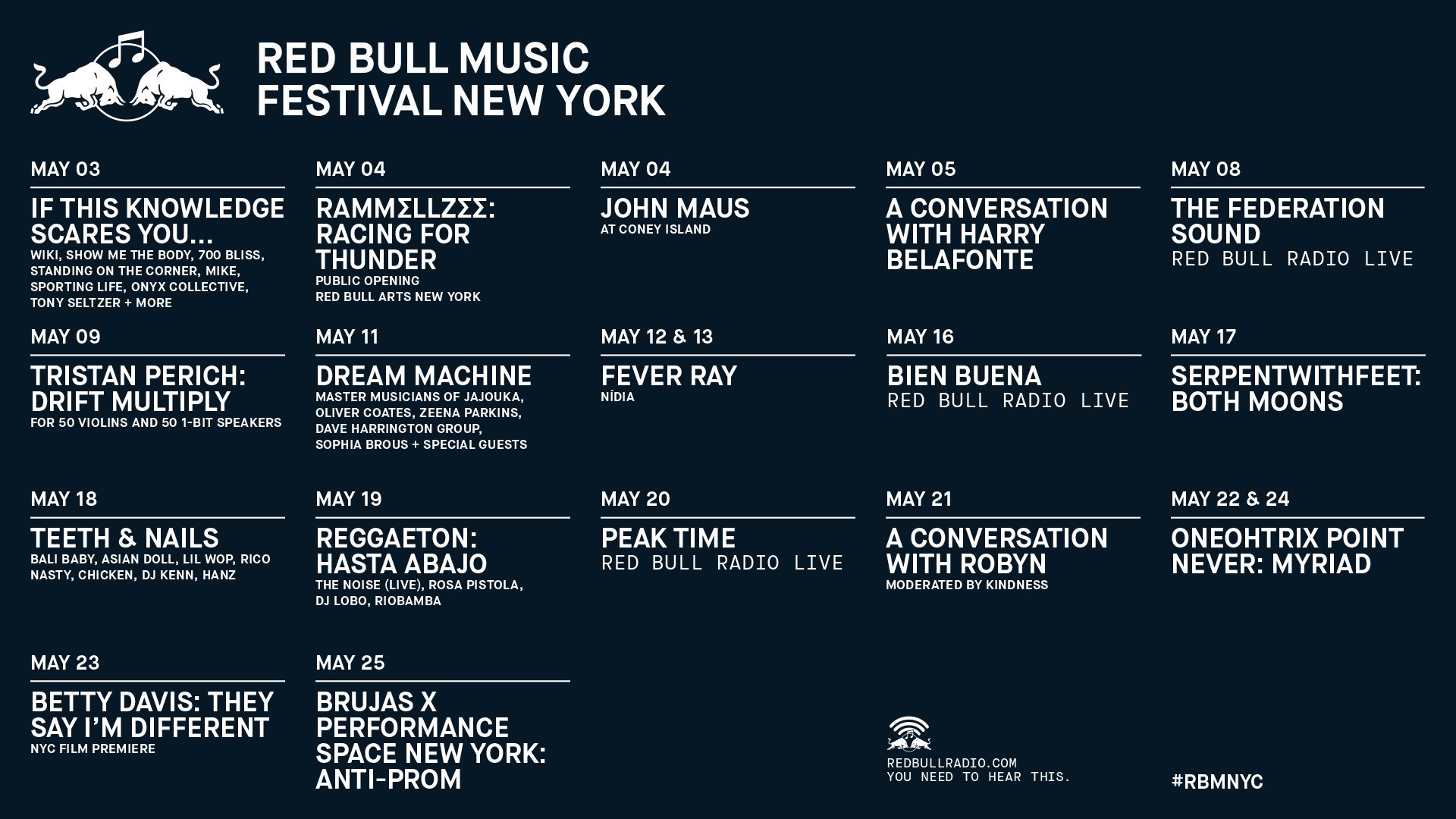 Innovative Music Series Returns To New York City This May

NEW YORK, March 7, 2018 /PRNewswire/ — Red Bull Music Festival New York returns this May with another diverse program of original events, world premieres, and talks with icons and innovators. Returning for a sixth year, the widely praised annual festival has become a New York City institution featuring performances by today’s most forward-looking musicians; tributes to legendary artists, scenes, and sounds; and conversations with impactful, innovative musicians. The shows will unfold throughout the boroughs at some of NYC’s most unique settings from iconic institutions to uncharted spaces completely re-configured for the occasion.

Over the past six years, Red Bull Music Festival New York has been a go-to home for artists to explore large scale ideas and event concepts. This year is no exception and will serve as the world premiere of Oneohtrix Point Never’s MYRIAD – a multi-level, daring, immersive performance built specifically for one of New York’s greatest performing arts spaces, the Park Avenue Armory; renowned modern composer and sound artist Tristan Perich will premiere Drift Multiply – a piece for 50 violins and 50 self-built 1-bit speakers taking place at one of the largest churches in the world, the Cathedral of Saint John the Divine; and serpentwithfeet – whose work is both sensual and spiritual in its intensity, interwoven with sparse and dramatic productions, and punctuated by classical instrumentation – will elaborate on his delicate vision in a unique performance space with both moons; and John Maus will bring his visceral and haunting take on synth-pop to Coney Island for new live experience.

The festival is not only a celebration of New York City but also of the international sounds and musicians that influence its culture. Celebrating the Caribbean and Latin communities’ deep ties throughout New York City, the month will feature a conversation with one of the most successful Jamaican-American artists in history – 91-year old musician, actor, social activist and icon Harry Belafonte, who will reflect on his life and career through the lens of the city he has long called home, New York; a night exploring reggaeton’s underground beginnings with a rare reunion of The Noise; and live installments of Red Bull Radio shows The Federation Sound, hosted by dancehall and reggae aficionado Max Glazer, and Bien Buena, which explores reggaeton and dembow with hosts Riobamba & Uproot Andy.

This year will also feature two of Sweden’s most unique and dynamic musicians: unpredictable Swedish experimental electronic artist Fever Ray will kick off her North American tour with two performances at Brooklyn Hangar in support of her new album Plunge; and Swedish singer, songwriter, label owner and producer Robyn will sit down for an in-depth conversation with her friend and fellow musician Kindness.

The festival will also include tributes to cultural game changers by the young artists they have influenced. Red Bull Arts New York will present RAMMΣLLZΣΣ: Racing for Thunder, the largest survey to date of the legendary artist, graff writer, hip-hop pioneer, Gothic Futurist theoretician, and New York cult icon. from May 4 through August 26. The opening night of the festival will feature young artists continuing in his multi-disciplinary footsteps including Wiki, Show Me the Body, 700 Bliss (Moor Mother and DJ Haram), Onyx Collective, Mike, Standing On The Corner, and more. Betty Davis, one of the most important and influential voices of the funk era, shattered the limits of R&B, funk and feminism. The festival will host the New York City premiere of a documentary about the elusive legend, Betty Davis: They Say I’m Different. Brujas are a current day, limit-shattering young collective infused with the inclusiveness of skate and queer cultures, who will close out the festival with the third annual Brujas Anti-Prom.

The New York Times noted of the 2017 festival, “The company’s commitment is strong, and also thoughtful: Its concerts tend to double as history lessons, often spotlighting underappreciated artists and scenes. In the music world, it has been, with exceptions, a rare example of corporate largess deployed with aesthetic care, making for one of the most invigorating musical series in the country.”

Tickets for Red Bull Music Festival New York go on sale Thursday, March 22 at 10am ET. See more details on the individual events, sign up for the festival newsletter and purchase tickets at nyc.redbullmusicfestival.com.

May 03: If This Knowledge Scares You, The Equation Is Working with Wiki, Show Me The Body, Standing on the Corner, MIKE, Sporting Life, Onyx Collective, Tony Seltzer, 700 Bliss (Moor Mother + DJ Haram)

May 05: A Conversation with Harry Belafonte

May 17: serpentwithfeet: both moons

May 21: A Conversation with Robyn, moderated by Kindness