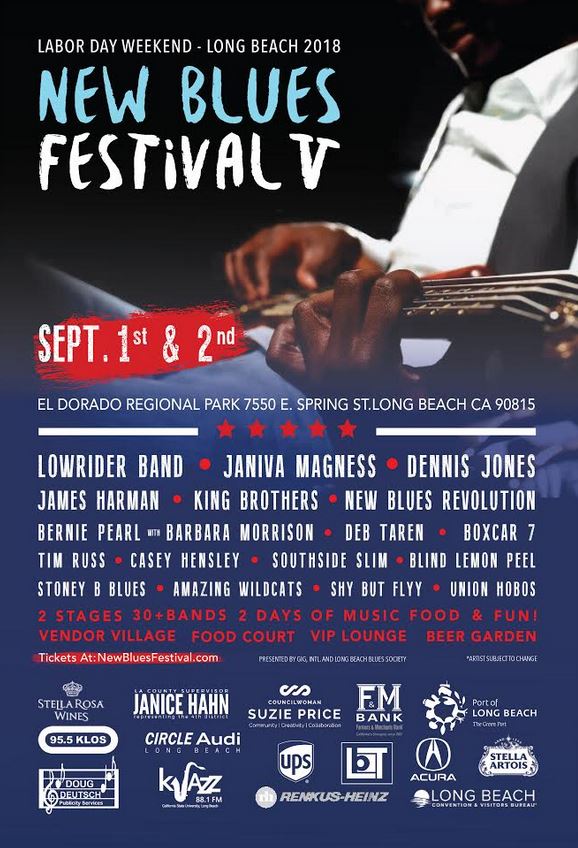 ~In Conjunction with the New Long Beach Blues Society~

Once again, this year’s New Blues Festival presented in conjunction with the Long Beach Blues Society “Preserve the Past, Promote the Future.”

Saturday’s stellar lineup includes the triumphant return of Long Beach legends, Lowrider Band. These four Multi-Platinum singer-songwriters (Howard Scott, guitar, Harold Brown, drums, Lee Oskar, harmonica, BB Dickerson, bass) are joined by Lance Ellis (saxophone, flute), Pete Cole (keyboard), and Chuck Barber (percussion). Since 1962, members of Lowrider Band have compiled a tapestry of quintessential songs and live performances so musically infectious that its moniker traces from Los Angeles to Mexico City and from London to Copenhagen. The genius of these musicians is captured in the musical medley of Hispanic, African-American, Asian and mainstream cultures, resulting in monster compositions such as “Slippin into Darkness,” “Why Can’t We Be Friends,” “9 to 5 (Ordinary Man),” “All Day Music” and many other chart-toppers. Their signature song “Low Rider” was inducted into the Grammy Hall of Fame in 2014.

Sunday’s strong Main Stage lineup features the return of Janiva Magness, whose critically-acclaimed album Love Wins Again was a 2017 Grammy nominee in the Best Contemporary Blues category. Magness, widely acknowledged as one of the top female vocalists in the blues genre since arriving on the scene the early ’90s, is a past B.B. King Entertainer of the Year recipient, twenty-six (!)-time Blues Music Awards nominee, seven-time Blues Music Award winner, and 2015 Contemporary Blues Female Artist of the Year. Magness’ fourteenth album, Love Is an Army, is a brilliantly-crafted bridge between the past and present, blending the echoes of classic soul and Americana music with timeless themes of love and the very contemporary sound of protest.

Joining Magness on the Main Stage/Sunday: Harpist extraordinaire and Blues Grammy nominee, James Harman, “Your Full-Service Bluesman Since 1962” who started playing in juke joints and dance clubs throughout the South and at the age of eighteen, subsequently moved to California, and quickly rose to fame for his unique, no-nonsense stage presence and performance. Harman’s acclaimed 2015 release Bonetime received an unprecedented five BMA nominations. Also: Southside Slim, recent LA Weekly’s Music Award recipient for Best Contemporary Blues/R&B Artist; the respected ‘Dean of SoCal traditional blues guitarists’, Bernie Pearl; the Pure-bred roadhouse blues’ of the King Brothers; a ‘mix of jazz with lighter styles of blues’ as presented by the Deb Taren Band; San Diego-based guitar standout, Stoney B Blues; and the Legends of Long Beach Blues Awards.

The New Blues Festival is now in its fifth big year, and was expanded to a two-day event in 2015 due to the overwhelming success of the inaugural NBF, when over 2,000 music lovers of all ages filled POA Park in Long Beach. Yearly attendance has grown exponentially, with a projected attendance of 8,000 for both days this year.

“Los Angeles and Orange Counties have responded very well to the (New Blues Festival) concept. We definitely hit on a pent-up demand for a long-running inter-generational tradition, and we are excited to once again share all this great music with the public”, says William Grisolia, Producer and Founder of the New Blues Festival.