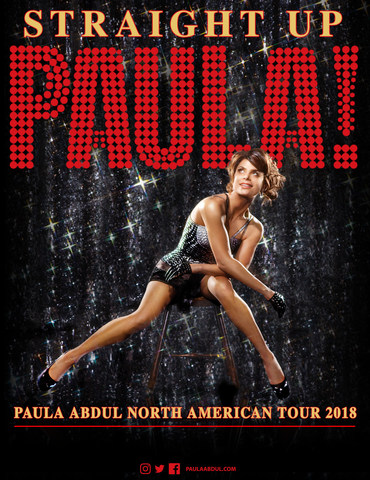 Will Travel Across North America This Fall -Tickets On Sale to the General Public Starting Friday July 13th at PaulaAbdul.com

The singer / dancer / choreographer will be performing her most memorable hit songs including Straight Up, Forever Your Girl, Opposites Attract, Rush Rush and Cold Hearted – just to name a few. In her three-decade career Paula has sold over 60 million records, had six number one songs, earned seven MTV Awards, a Grammy Award and two Emmy Awards.

STRAIGHT UP PAULA!
In 2017 Paula toured the US on the sold-out Total Package Tour (Paula Abdul, Boyz II Men, New Kids on the Block), performing in over 45 cities including stops at the Hollywood Bowl in Los Angeles and Barclays Center in New York.

Tickets for STRAIGHT UP PAULA! will be on sale to the General Public on Friday, July 13th at 10am local with tickets available at www.PaulaAbdul.com.

As one of the most celebrated pop icons in the world, Paula Abdul is best recognized as an award-winning choreographer, dancer, singer, actress and television personality. Beginning her career as a cheerleader and choreographer for the Los Angeles Lakers, her talents were soon recognized and utilized by artists such as Janet Jacket and George Michael among many more. Upon launching her solo pop career in 1989, Paula exploded onto the charts with her music which ultimately totaled six number one hits and over 60 million records sold, becoming an American pop pioneer and multi-platinum recording artist with legendary music videos to the MTV generation. She is also recognized for her nine-season run as an original judge on the global sensation television series American Idol, which were followed by her presence on The X-Factor and So You Think You Can Dance to name a few. Among Paula’s many accolades she has earned two Emmy Awards, two GRAMMY Awards, and three American Music Awards. In 2017 Paula returned to the stage for the nationwide Total Package Tour preforming in over 40 cities. When not lending her talents to the stage & screen, Paula is an active spokesperson and advocate for the American Humane Association, Turnaround Arts, Avon Foundation, GLAAD, Lupus LA, Red Cross and more. www.paulaabdul.com