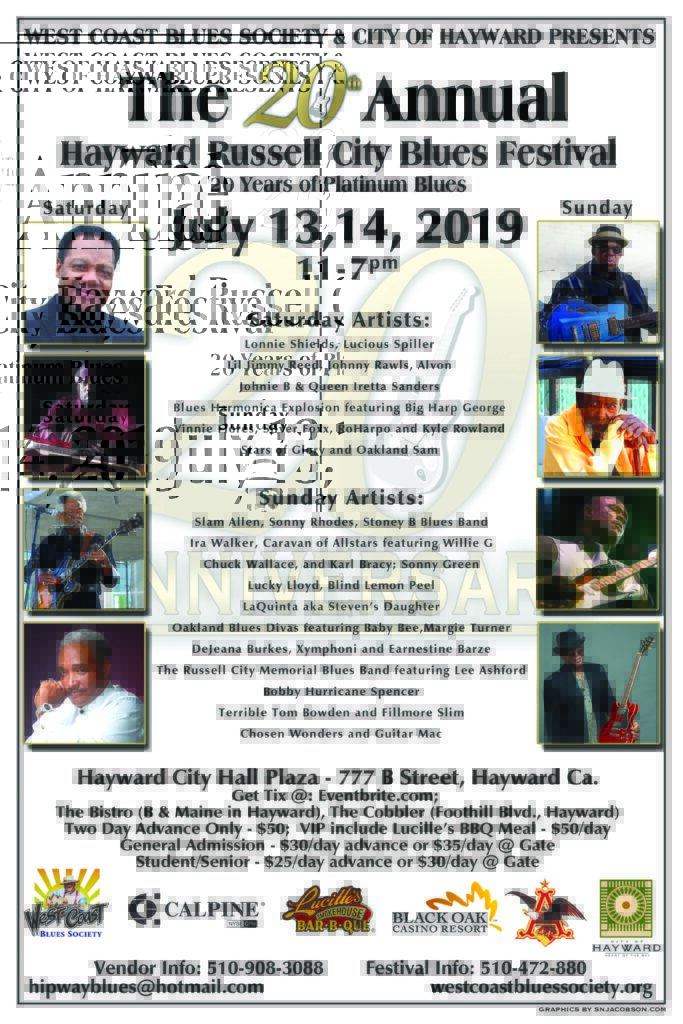 The Hayward Russell City Blues Festival is a celebration honoring the vibrant Blues tradition of the area.

Russell City is a landmark on the map of America’s contributions to world culture giving Hayward a unique musical leg reflecting the African-American experience.

In 1999 the West Coast Blues Society began the Hayward Russell City Blues Festival as a joint venture with the City of Hayward, a celebration honoring the vibrant Blues tradition of the area. 2019 will be the 20th Year of the annual festival, making it one of the oldest continuous Blues festivals in the West.

Opening on Saturday, July 13th. Is Oakland Sam, who plays as if he was born in the Mississippi Delta. Actually born and raised in Oakland California & sometimes called the Blue-eyed Delta Blues Man, he gets the festival off to a real bluesy start!!!

The Stars of Glory are up next so get there early and don’t miss their incredible performance.

Next to explode is Vinnie Flores. It started when Vinnie was 3 and got his first harmonica. The 20-year-old is already earning a reputation in the blues harmonica world!

Also in the Explosion are Silver Foxx, he must be heard to be believed!

Roharpo a self-taught harmonica player and singer with big-time stage appeal and presence. Roharpo hails from New Orleans and was raised in Baton Rouge Louisiana, raised in a family of gospel and blues musicians and singers. Ro will make you feel inspired and move you with his energy and music.

Kyle Rowland will be closing out the Blues Harmonica Explosion. “Blues harmonica player of the year” and “Blues New Artist of The Year” in 2009 from the West Coast Blues Hall of Fame, Kyle Rowland, has been dominating the stage since the tender age of 10 years old. With help from a few of his heroes such as James Cotton, Hubert Sumlin, Matt “Guitar” Murphy, and many others, Kyle learned specific techniques of stage presence, the music business, and several highly revered harmonica secrets.

Johnie B., born and raised in Chicago, has been playing guitar most of his life. Queen Iretta, originally from Tunica MS., has been singing the blues for many years. Johnie B. has a way of delivering his own guitar style, with strong and powerful vocals, mesmerizing his audience. On the other hand, Queen Iretta has a sweet style with a Mississippi Twist. Together they make a powerful and strong Blues couple.

One of the most versatile Musicians Singers and Entertainers on the music scene today is Mr. Alvon Johnson. A fan describes him like this: “This is one man that can send any woman out of her mind with his soulful voice and moving guitar music. This is a true showman, and he gives his all in all of his performances. If you have not been to one of his shows, you owe yourself this one pleasurable evening with a man that can change your life in just one night. You will be glad you did.”

Johnny Rawls is a soul-blues legend. In fact, the term “soul blues” was invented to describe his music. With a career spanning more than 50 years, he’s done it all. The Blues Music Awards, Blues Blast Awards, Living Blues Critics Poll Awards, and the W. C. Handy Awards have all acknowledged Johnny with multiple awards and nominations, including Soul Blues Album of the Year and Soul Blues Male Artist of the Year.

At 80, Leon Atkins, better known as Lil’ Jimmy Reed, is the real deal, as will be attested to by anyone privileged to hear his stinging guitar work, gritty vocals, and haunting harmonica. Lil’ Jimmy epitomizes the classic Louisiana down-home blues tradition.

Lucious Spiller is one more performer who is as good a bluesman today… as there ever was before. Watching Spiller entertain, one can easily imagine a blues performance in the 1930’s; Lucious is just that real.

West Helena, (often considered an extension of the Mississippi Delta), Arkansas native, Lonnie Shields is genuinely one of the finest of the next generation of the blues. Lonnie comes across as a mild-mannered southern gentleman with a laid back nature. On stage, he is transformed into an extraordinary entertainer moving to his music and feeding off the energy of the audience. His music is deeply rooted in Gospel, soul, and R&B while his sound, like his soul, is never too far from the home of the blues.

Opening the show Sunday will be Guitar Mac and His Blues Express. He’s from Cotton Plant, Arkansas, but his music is pure Mississippi Delta Blues.

The Chosen Wonders will be providing the Gospel to start off our morning.

The Russell City Memorial Blues Band features Lee Ashford, Bobby “Hurricane” Spencer, Terrible Tom Bowden and Filmore Slim will be next to amaze the audience. Veterans of too many performances to name, just know you want to get there in time to see this performance!

Coming up next is the Oakland Blues Divas featuring Baby Bee, DeJean Burkes, Margie Turner, Xymphoni and, Earnestine Barze, who could be the highlight of the afternoon.

LaQuinta, aka Stevens Daughter, is the next outstanding performance on the bill.

Lucky Lloyd was born in a little town called Hamtramick, Michigan but grew up in Detroit just 1 mile from Hitsville, better known as Motown. There he was introduced to a style of music called “The Blues.” At the age of nine, he began to play, and that’s where the Lucky Lloyd Blues History began. His live performances are energized and exciting.

Sonny Green. For Southern Soul Blues performed with grit, wit, and sartorial splendor, there is only one man to go to, Los Angeles-by-way-of-Louisiana singer Sonny Green. Coming from the same emotional and musical place as his barroom-philosophizing contemporaries Johnny Taylor, Bobby Patterson, and Little Milton, Green’s “Jody’s On The Run” is considered a classic in the endless canon of backroom cheating songs.

A native of Arkansas, Chuck Wallace began his singing career in the church as a six-year-old with his sister, Willie Ann Wallace. Wallace has appeared with several top acts over the years, including Smokey Robinson, Tyrone Davis, Johnny Taylor, Luther Ingram, Shirley Brown, Vernon Garrett and many more. He currently performs with his band, Chuck Wallace and Friends.

Southern Soul is the best way to say, Ira Walker. His musical pedigree has evolved into a unique style of Blues, Rock, & Soul. This music will touch the soul and raise your spirits!! Ira’s songs run the gamut of the Blues genre, from Texas and the Mississippi Delta to Chicago.

Stoney B was born in Chicago, Illinois, and grew up listening to the blues. His father Lil’ Howling Wolf, who now lives in Memphis, Tennessee, played and performed the blues in Chicago. He feels and shares at a soulful level the essence of the blues with strong influences from Muddy Waters, BB King, and Jimmy Reed.

Sonny Rhodes continues to be a road warrior, delighting and surprising audiences with his virtuosity mostly displayed on lap steel guitar these days although he is a masterful electric guitarist. He has recorded over two hundred songs. “I’m what you call a self-proclaimed Disciple of the Blues!” said Rhodes about his years playing and singing for fans of blues around the world. He has been nominated fifteen times for the Blues Music Awards and won the Instrumentalist-Other category in 2011.

Slam Allen is a gifted musician and entertainer who was the lead singer, lead guitarist, and bandleader for the legendary Grammy-nominated James Cotton. “Playing with Cotton was such a great experience for me! There are things I learned from him that you can’t learn from any school. It was a great honor!” says Slam. Today, Slam Allen continues a national and international mission to fill his audiences with joy, happiness, and love. “If I can entertain the people, make them happy, and inspire them to stay positive about life, I have done my job!” This is Slam Allen’s message of love to the world!

The Blues is a condition, Blues Music is the cure!

Get your tickets at http://bit.ly/HRCBluesFest