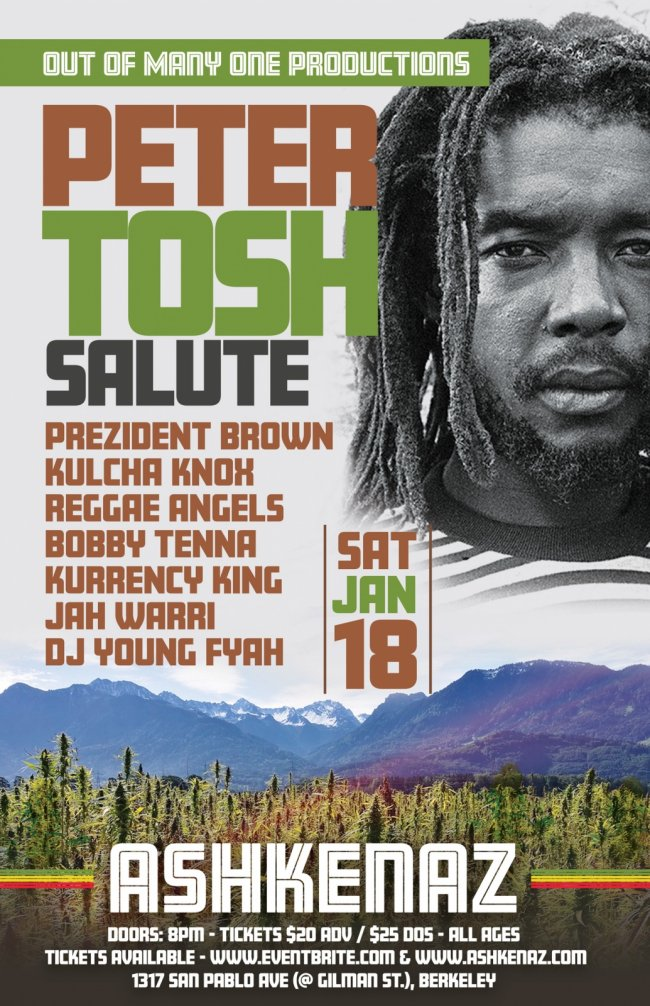 Honoring the legacy of the late great Peter Tosh, aka ‘the Mystic Man’, ‘the Stepping Razor’,
“the Bush Doctor”!

Headlining this year’s lineup is Prezident Brown. Prez is a Jamaican roots reggae artist who carries a universal message of love, consciousness and righteousness. He is a gifted vocalist who has been steadily focusing on his calling as a singer from an early age, never wavering in his focus. Prez has been touring the U.S. consistently and building his following with his I Sound band.

Also, on the lineup is Knox Dixon, aka Kulcha Knox. Born on the high tropical mountains of Manchester, Jamaica, he has traveled, toured, and performed in the African countries of Rwanda, Ethiopia, Malawi, Ivory Coast, and Gambia to name a few; and across many countries in Europe. In 1997 he released his debut album Praise Jah Again under the Kariang Music label and toured with reggae artists, Capleton, Iqulah, InI Kamoze and more. Wherever Kulcha Knox performs, his melody, energy, versatility, and unique style leave an imprint with audiences of all nationalities, creeds, and colors. He is the son of the late great music/reggae pioneer, radio DJ, producer and educator Jeff “Free I” Dixon.

Also on the lineup are the Reggae Angels, a world-class, Oakland, CA-based roots reggae act with a large music catalog of 14 CD’s. In 2019 they performed on their fifth U.S. tour backed by Sly & Robbie, co-billing with Mykal Rose. This was a major five-week coast-to-coast tour on which they headlined five festivals across the country. Their last two albums The Way and Rely on Him were recorded with Sly and Robbie and the Taxi Gang. The Reggae Angels have been recording and performing conscious roots reggae for over two decades. They have toured the US, Hawaii, Canada, South America, Europe and Africa with Sly & Robbie, Prezident Brown, Andrew Tosh, Everton Blender, Don Carlos, Anthony B, Junior Reid, The Abyssinians, Sugar Minott, Warrior King and Frankie Paul and on their own. Their show is high-energy dance music with a prophetic message and a happy uplifting sound.

The multi-talented singer songwriter and producer, Bobby Tenna will also be performing. Born in Orange District, St. James, Jamaica, music was always a part of Bobby’s life. Early on he honed his vocal skills as a member of his church choir and would later perform on the cabaret circuit and create a masterful blend of showmanship and style that made him in demand. In 2007 Bobby released his debut album Give Thanx 4 Life. The lyrical content and sound found favor with radio deejays worldwide who gave it solid rotation on the airwaves. Through hard work and dedication to his craft, Bobby Tenna has amassed an impressive catalog of songs which have gained rave reviews from music enthusiasts and the media. Currently his music is getting considerable airplay in Jamaica.

Oakland-based Reggae festival Producer, Carlton Campbell of Out Of Many One Productions, continues to produce this annual celebration in honor of Peter Tosh at various venues throughout the S.F. Bay Area.

Campbell says, “Peter Tosh is the man, the real thing. As a member of his family (they are blood cousins and he used to tour with him), I want to make sure his name, music and legacy live on. He was taken too soon so it is my job, my honor, my passion to keep his legacy going.”

Ashkenaz Venue is located at 1317 San Pablo Ave in Berkeley (at Gilman St.).

Out Of Many One Productions