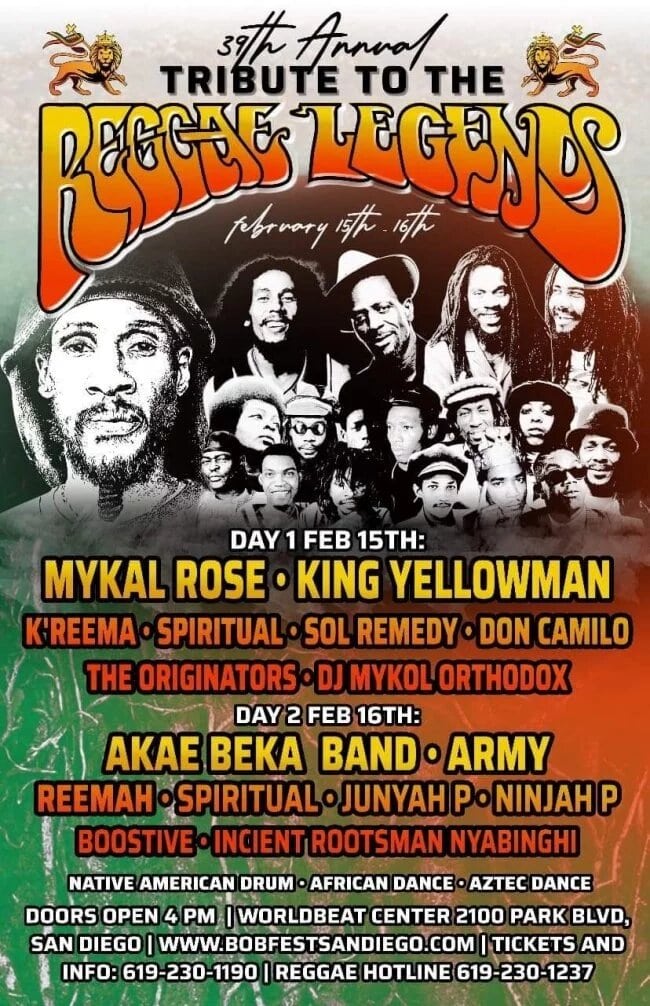 Tribute to the Reggae Legends Festival aka Bob Fest was founded by WorldBeat Productions 39 years ago. Each year the festival pays respect to all the past and living legends of reggae music.

Mykal Rose is celebrating his acclaimed new album called ‘Ska Ska Ska.’ For many years, Michael Rose has been recording and performing his brand of militant, hardcore Jamaican music to the delight of reggae fans around the world. As a solo artist, with Black Uhuru, and back as a solo artist, the “Ruff” Rose has achieved great success throughout his career including receiving reggae’s first Grammy award for the album, Anthem. For the first time in his career, reggae legend and Grammy award winner, Mykal Rose, takes on a Ska album as a result of his drive to honor the music he grew up with and bring it back to his island since he feels ska music is worldwide except in his hometown.

Longtime band members Edmund and Ras L (Ras Elyment Records) have toured and recorded with Vaughn for over a decade. Singer Ryan/ Ishence (Higher Bound Productions) also produced albums with Vaughn for 14 years; Suren has been touring with Akae Beka since 2015 and Peter has been touring since 2018, and his older brother was a drummer for MIDNITE. Producer and singer Junyah P joined the band recently and brings a unique bubble to the keys.

Akae Beka often charted on Billboard and Itunes/Apple Music. Vaughn Benjamin released 73 albums during his lifetime, and reggae lovers worldwide are eagerly anticipating the release of Akae Beka’s unreleased works as he left behind a treasure trove of albums. For more info please go to @theakaebeka on FB and @akae_beka on IG. This evening is a tribute to Vaughn Benjamin.

King Yellowman also has a new album called ‘No More War.’ King Yellowman has gained wide popularity on the dancehall reggae scene in the 1980s with his “slack” lyrics not fit for airplay. His successful singles, including “I’m Getting Married in the Morning,” and “Nobody Move, brought him worldwide acclaim. He has been nominated twice for a Grammy Award, and was awarded the Order of Distinction (officer class) for his contribution to Jamaican Culture and Entertainment in 2018. Yellowman has been touring consistently all over the world; and is particularly thrilled to be touring with his talented daughter and releasing his new. His daughter K’reema is also excited about her father’s latest project. “I am very excited; it’s been a long time coming,” said K’reema. Yellowman’s new single “No More War” which he co-wrote with his daughter Kreema was released earlier this year.

YellowmanK’Reema (Yellowman’s Daughter)
Singer/songwriter, born and raised in Jamaica, now living in the United States, Kareema Foster, also known as K’reema, is an up and coming musician pursuing her long-lived dream and first love: Music! “My music is a representation of me, infusing both worlds, my reggae and dancehall roots with my pop and R&B influence, creating my sound” says K’Reema. She is following in her father’s footsteps and paving her own way in the music industry with releases like “We Don’t Give A F#%K”. With a large Twitter following, she is garnering attention for herself and setting out to make her own name in reggae, just like dad.

Army (Fritzmaurice Williams) was born and raised on St. Croix, Virgin Islands. He is to be counted among the many conscious singers and players of instruments from St. Croix who are worthy of international recognition. Army’s voice – while influenced by such artists as Nat King Cole, Dennis Brown and Freddie McGregor – is unique in all of contemporary reggae with its amazing ability to be both deeply soothing and intensely energizing. With a voice as invigorating and free as the wind, and with word sound utterances that penetrate hearts and minds, Army’s mission is clear. He is firmly committed to using his music as a weapon in the war for spiritual renewal and justice for all peoples.

Reggae artist, Spiritual lives by the principles of integrity and good character and doesn’t imitate. He writes original songs of meaning and depth, and then records them in a studio with “live” musicians, including horn and lead guitar players, percussionists and backing singers. Reggae music hasn’t sounded like this for a generation. His music is from the heart, bearing messages for all nations, From the start, Spiritual’s music sang of hope and uplifted the spirits, which is how he got his name.

Reemah, hailing from the island of St. Croix, is one of the new Roots Revolutionaries in this time and space encouraging all those that listen with an uplifting and spiritual message.
Having always been passionate about stimulating the mind and soul through music, Reemah has been planting the seeds of a divine flame, bringing awareness with each social commentary that is seemingly wrapped in a gritty, unapologetic yet sweetly satisfying package.