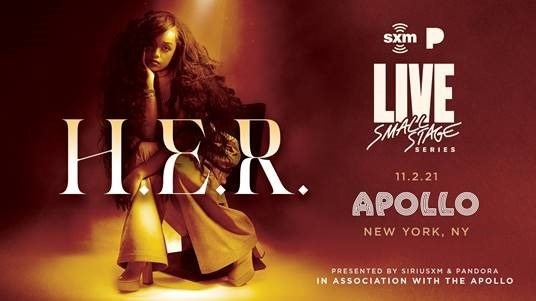 Academy and Grammy Award Winner H.E.R. to Perform at the Apollo for SiriusXM and Pandora

NEW YORK, Oct. 13, 2021 /PRNewswire/ — SiriusXM and Pandora announced today that singer-songwriter H.E.R. will perform at the world-famous Apollo Theater in Harlem, New York in a special invitation-only concert for SiriusXM subscribers and Pandora listeners on Tuesday, November 2. Presented in association with the Apollo.

The exclusive concert, which will feature H.E.R. performing music from her recently released RIAA-certified Gold album, Back Of My Mind, marks the first time that H.E.R. has performed a full concert at the iconic venue since her Apollo debut as part of Showtime at the Apollo at the age of 9. H.E.R.’s performance for SiriusXM and Pandora comes in the midst of her Back Of My Mind Tour, giving subscribers and listeners a chance to see H.E.R. in an intimate setting.

“All of the greats have performed at the Apollo…. I’m super excited to be performing at such an iconic venue. It’s going to feel like I’m a part of History. Thank you for having me as a part of the series SiriusXM and Pandora,” said H.E.R.

H.E.R.’s performance for SiriusXM and Pandora’s Small Stage Series will air live on SiriusXM’s The Heat via satellite (channel 46) and on the SXM App on Tuesday, November 2 at 8:00 pm ET.

To maintain the highest public health standards and/or requirements, SiriusXM will adhere to health and safety protocols for the venue, and all state and local health mandates to protect attendees, staff, and artists.

SiriusXM and Pandora are offering a chance to win tickets and a trip to New York City to see H.E.R. perform at the Apollo Theater on November 2, 2021. SiriusXM subscribers as of 7/21/21 can enter here; Non-subscribers/listeners can enter here; and Pandora listeners can enter for a chance to win tickets only here. No Purchase Necessary. U.S. only, must be at least 18+ to enter. Odds of winning depend on the number of eligible entries received. Subject to Official Rules. Void where prohibited.

The legendary Apollo Theater—the soul of American culture—plays a vital role in cultivating emerging artists and launching legends. Since its founding the Apollo has served as a center of innovation and a creative catalyst for Harlem, the city of New York, and the world. For more information, visit www.apollotheater.org.

SiriusXM is available to subscribers in their car and on their phone and connected devices at home with the SXM App. Streaming access is included for most subscribers. Go to www.siriusxm.com/ways-to-listen to learn more.

H.E.R.
Three letters that need no explanation. Over the course of five years, singer/songwriter/multi-instrumentalist H.E.R. has had an incredible journey, punctuated with inspiring projects and accolades that have quickly ascended her to superstar status.

H.E.R. kicked off 2021 in the most stellar of ways by winning two Grammy Awards – Song of the Year for “I Can’t Breathe” and Best R&B Song for her contribution to Robert Glasper’s “Better Than I Imagined,” plus an Academy Award for her powerful song “Fight For You” from the Warner Bros. Pictures’ film Judas and the Black Messiah. In 2019, she won two Grammy Awards for Best R&B Album (H.E.R.) and Best R&B Performance (“Best Part” featuring Daniel Caesar) and a NAACP Image Award for Outstanding Female Artist, among additional awards and honors.

To date, H.E.R. has accrued nearly 8 billion combined audio and video streams worldwide – and counting – of the breakthrough projects H.E.R. (RIAA-certified Platinum), I Used To Know Her, and her recently released full-length album, Back of My Mind, which debuted at #1 on Billboard’s Top R&B Albums chart and is now RIAA-certified Gold.