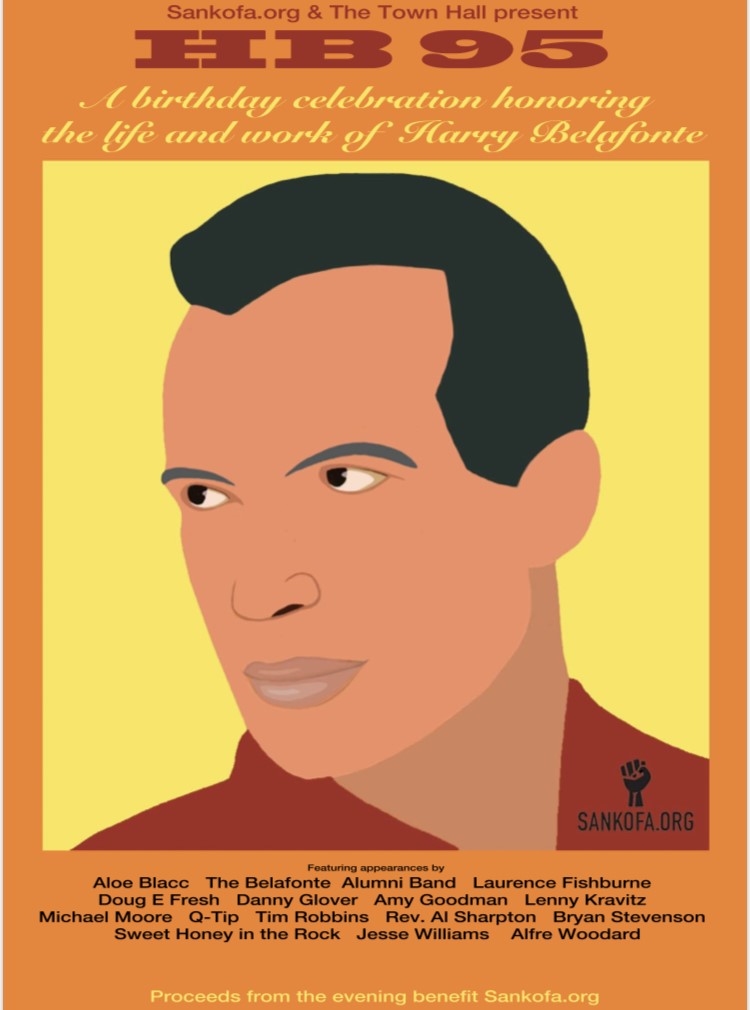 In addition to live performances, Mr. Belafonte’s memorable film, television, and humanitarian career will be showcased through archive footage along with testimonials from some of today’s most popular and celebrated artists, activists, and entertainers.

Proceeds from this evening will benefit Sankofa.org and several of its programs including an innovative virtual/alternative reality technology and arts reentry program created to impact the capacity of returning citizens to develop critical core skills for a sustainable successful transition back to the community. This scientifically validated art-based program with virtual reality has been used to create breakthrough treatments for Post-Traumatic Stress Disorder and is showing promise in the treatment of many other mental health conditions.

Harry Belafonte said, “I am honored that so many are coming together to celebrate my birthday, life, and legacy. I founded Sankofa.org alongside my daughter Gina and Raoul Roach to create additional space for artists and allies to join force to garner an artistic approach to the needs of our disenfranchised communities… to use art as a tool to educate messages of hope and to encourage and energize the public to become engaged. One heart, One mind, One soul.”

Gina Belafonte, Sankofa.org Executive Director stated, “Artists are the gatekeepers of truth, civilization’s radical voice. Without art we have nothing. Sankofa.org uses the arts as a tool to engage people to action. We are so excited to honor my father on his 95th birthday and celebrate his legacy.”

“We are happy to celebrate this milestone birthday of the iconic Harry Belafonte. As a legendary artist and activist, he is an inspiration to us all. It is also beautiful to see Gina carry on the important work of Sankofa.org to positively impact future generations,” said Bridgid and Don Cheadle about the occasion.

Actress and activist Alfre Woodard said, “HB95 is the celebration of Harry Belafonte’s bold, insistent, joyous stride towards Justice. Sankofa.org is the vehicle he’s given the generations to continue that journey forward. There goes the roof!”

“Harry Belafonte is the greatest living artist-activist! His legacy is legendary and his integrity is impeccable!” – Dr. Cornel West

“As a proud and longtime board member I have observed first-hand the critical role Sankofa plays in utilizing art consciousness as a tool of freedom and innovation through programming and mentorship.” – actor and activist Jesse Williams.

While this is its first public fundraising event, Sankofa.org has created and produced innovative and cutting-edge programs for the past decade. The organization is committed to rooting out systemic violence, work tirelessly for the adoption of restorative justice initiatives, and champion meaningful reforms for immigration and a livable minimum wage.

Tickets for the event are available here: http://thetownhall.org/event/hb95-honoring-harry-belafonte

Town Hall is committed to providing healthy and safe facilities for audiences, performers, and staff. Based on CDC and state guidelines at the time of performance, protocols may include mask enforcement, increased cleaning and ventilation/filtration enhancements, vaccination or negative test verification, and more. These are subject to change. Ticket holders who do not comply with venue policies will not be admitted.

ABOUT SANKOFA.ORG
Sankofa.org was founded by Harry Belafonte, his daughter Gina Belafonte, and Raoul Roach in 2012. Its mission is to educate, motivate, and activate artists and allies in service of grassroots movements and equitable change. Sankofa.org focuses on issues of injustice that disproportionately affect the disenfranchised, the oppressed, and the underserved, which left unaddressed will continue to impact the lives of too many individuals and remain a scar on our nation’s moral character. The non-profit organization is fiscally sponsored by Social Environmental Entrepreneurs.

ABOUT TOWN HALL
Town Hall has played an integral part in the electrifying cultural fabric of New York City for more than 100 years. A group of Suffragists’ fight for the 19th Amendment led them to build a meeting space to educate people on the important issues of the day. During its construction, the 19th Amendment was passed, and on January 12, 1921 The Town Hall opened its doors and took on a double meaning: as a symbol of the victory sought by its founders, and as a spark for a new, more optimistic climate. In 1921, German composer Richard Strauss performed a series of concerts that cemented the Hall’s reputation as an ideal venue for musical performances. Since, Town Hall has been home to countless musical milestones: The US debuts of Strauss, and Isaac Stern; Marian Anderson’s first New York recital; in 1945, Dizzy Gillespie and Charlie Parker introduced bebop to the world; Bob Dylan’s first major concert in ’63; and much, much more.