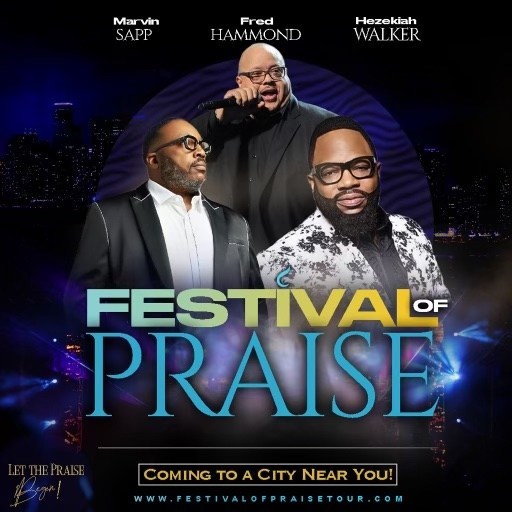 The 30-city tour will be headlined by Gospel music icon Fred Hammond, along with Gospel superstars Marvin Sapp and Hezekiah Walker

DETROIT, Dec. 2, 2021 /PRNewswire/ — After a two-year hiatus, the incomparable, soul-stirring Festival Of Praise is set to kick off its fifth nationwide tour in March 2022. The 30-city tour will be headlined by Gospel music icon Fred Hammond, along with Gospel superstars Marvin Sapp and Hezekiah Walker. Tickets will be available for purchase via Ticketmaster and other outlets where concert tickets are sold on Friday, December 3rd 2021.

Produced by Face to Face, Inc. and booked exclusively by Jeff Epstein and Adam Zagor of Universal Attractions Agency (UAA), the renowned Festival of Praise Tour follows in the footsteps of 1997’s The Tour of Life, which saw Hammond sharing the stage with Kirk Franklin and Yolanda Adams in front of crowds of more than half a million people. Festival of Praise Tour once again promises to be an unforgettable “Hand clapping and foot stomping, get up out your seat” worship explosion with production and stage sets unmatched in any gospel tour. For the first time in Gospel music history, 2022’s Festival Of Praise will offer a talented local choir in each city of the tour the opportunity to perform on the show.

More information and show announcements are available at www.festivalofpraisetour.com.

* Israel Houghton will appear in place of Marvin Sapp

Singer, songwriter, music producer and arranger Fred Hammond has been a leading pioneer of Gospel music since 1985. As the progenitor of ‘Urban Praise & Worship’, Hammond has influenced Pop superstars such as Justin Bieber, Chance the Rapper, Jamie Foxx, and more. Foxx explained in an interview on how Hammond’s “No Weapon” had a profound impact on Quentin Tarantino and the cast of D’jango during the shooting of some of the film’s most intense scenes. Included in Essence Magazine’s list of the “50 Greatest Male Singers of All Time”, Hammond has topped Billboard charts, sold millions of records, and collaborated with Snoop Dogg and Kanye West. Hammond was also a founding member of seminal Gospel groups Commissioned, and Radical for Christ.

Passionate orator, biblical teacher, 13 time Grammy-nominated, multi platinum-selling Gospel artist Marvin Sapp has an instantly recognizable voice that masterfully illustrates the excellence of the Word of God. A member of the Gospel group Commissioned from 1990 to 1996, God led Sapp to a thriving solo career. Sapp is also the co-Founder of Lighthouse Full Life Center Church in Grand Rapids, Michigan, and the Senior Pastor of The Chosen Vessel Cathedral in Fort Worth, Texas. He’s also a Metropolitan Bishop that oversees more than 100 churches in the Central Deanery of Global United Fellowship.

Bishop Hezekiah Walker is a Gospel Music Hall of Famer with two Grammy Awards, as well as numerous Stellar, Dove, Vision, Soul Train, and Gospel Music Workshop of America (GMWA) Awards. For more than thirty years, Walker’s music has served as anthems of hope and inspiration. He formed the Love Fellowship Crusade Choir, and actively pastors the thriving Love Fellowship Tabernacle, which he founded in his native Brooklyn, New York.