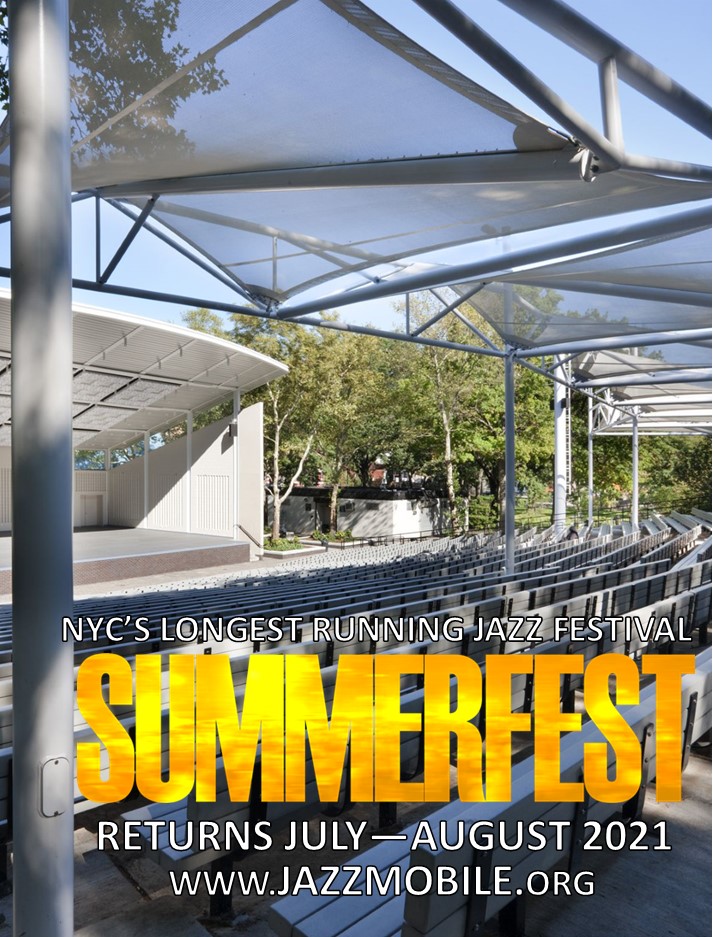 HARLEM, NY – June 7, 2021 – As New York and city parks begin to open up for concerts and other special events with live audiences, Jazzmobile’s 57th SUMMERFEST 2021 premieres on stages around New York City beginning July 7 with concerts featuring a diverse roster of jazz icons and emerging artists. Jazzmobile’s much-anticipated return – with (limited) audiences promises to be another outstanding year of high-quality performances by world class performers that will fill New York’s cultural landscape with jazz in all of its forms, including straight-ahead, swing, blues, Latin, Afro-Cuban and more.

On Wednesdays, Jazzmobile will be in residence at Grant’s Tomb and on Fridays they “return home” to the Richard Rodgers Amphitheater in Harlem’s Marcus Garvey Park. This premier festival will bring events in all other boroughs throughout New York City: Bronx, Brooklyn, Queens and Staten Island. This year SUMMERFEST is travelling to Westchester County and two of their main events include “Taylor-Made” a tribute to the music of Dr. Billy Taylor in honor of his 100th Birthday. A partnership with Lincoln Center for the Performing Arts, it will be presented in Damrosch Park as part of Lincoln Center Out of Doors!

During the month of June, Black Music Appreciation Month (initiated by President Jimmy Carter in 1979), Jazzmobile is presenting live performances in Co-Op City, St. Albans Park, the Denny Farrell Riverbank State Park, and on June 19th we are a partner for a public movie premiere and concert presentation as we Celebrate Juneteenth in Harlem with a free, outdoor screening of Summer of Soul presented by Target in association with Capital One, City Parks Foundation, SummerStage, NYC Parks’ Historic Harlem Parks and Jazzmobile. The special advance screening will be followed by live performances at The Richard Rodgers Amphitheater in Marcus Garvey Park featuring Questlove and surprise guests. Summer of Soul (…Or, When the Revolution Could Not Be Televised), directed by Ahmir “Questlove” Thompson, highlights the story of the momentous 1969 Harlem Cultural Festival which took place in Marcus Garvey Park, featuring never-before-seen footage from the massive concert series that was – until now – virtually eliminated from the history books. The film had its world premiere at the 2021 Sundance Film Festival and was met with rave reviews, taking home both the grand jury prize and the audience award. SUMMER OF SOUL will stream on Hulu in conjunction with Disney General Entertainment’s Onyx Collective; Searchlight Pictures will release it theatrically on July 2, 2021. Free tickets are required for entry; request ticket reservations today here.

All SUMMERFEST concerts are free, weather permitting and subject to change.

JAZZMOBILE
Jazzmobile was founded by National Endowment for the Arts Jazz Master Dr. Billy Taylor, Philanthropist and Arts Administrator, Ms. Daphne Arnstein with NEA Jazz Master Jimmy Heath in 1964. It is the oldest not for profit organization created with a mission just for Jazz. Jazzmobile’s mission is to present, preserve, promote and propagate America’s classical music Jazz.

For 57 years we have been presenting world class musicians and clinicians, further developing the pioneering free quality jazz programs started by our founders. They are – SUMMERFEST (NYC’s longest running jazz festival); and for decades we have brought free programs to underserved neighborhoods in all five boroughs, on city streets and in city park; SJW|Saturday Jazz Workshops have provided theory classes and performance training from young students, to emerging performers for over 50 years training “the next” generation of jazz artists be they professionals or hobbyists. For the non musician we offer “Jazz in The First Person,” a series of lecture demonstrations designed to introduce jazz music as a music appreciation course for toddlers to seniors. Jazzmobile’s education programs were all designed to be mobile, and like our core performance programs are free to our students and audience making them also accessible to underserved communities.

Similar organizations, large and small, continue to emulate our core programs – Jazz at Lincoln Center, the (former) Thelonious Monk Institute, The Jazz Program at the Kennedy Center (co-founded by Dr. Billy Taylor) to name just three. Over the years Jazzmobile and our programs have toured nationally and internationally – thanks to corporate and government support.
Next for Jazzmobile is a move into its new offices in the National Urban League Center on West 125th Street scheduled to open by 2024. Our new location will enable us to continue to expand our core and new programs such as our on-line education and performance programs. Jazzmobile will also be one of the art and culture organizations in residence at the Victoria Theater Center. Both are located in Central Harlem on West 125th Street. www.jazzmobile.org