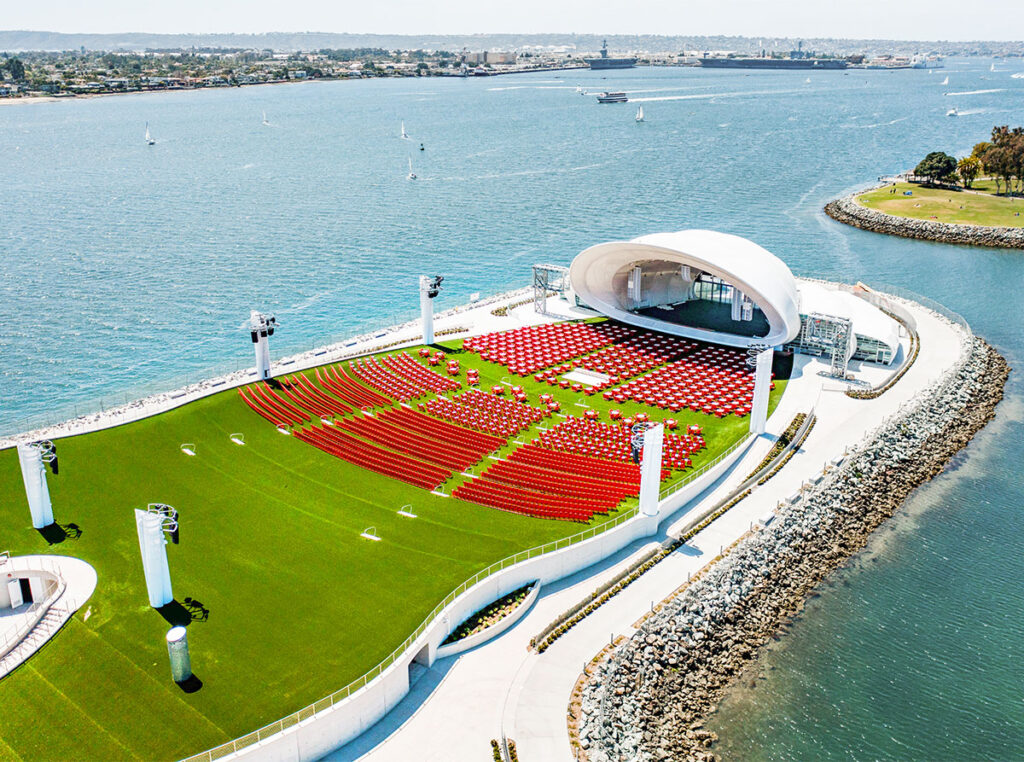 The second season at the spectacular outdoor venue—which opened Summer 2021—debuts June 24 with 38 performances over 14 weeks between June and September, with additional programming planned for October, November and December. Acclaimed artists including Common, Boyz II Men, Jennifer Hudson, Bernadette Peters and The Beach Boys, to perform alongside the San Diego Symphony. Subscriptions on sale now; single tickets for select special events go on-sale April 12; single tickets for all other concerts go on-sale May 3.

SAN DIEGO (PRWEB) MARCH 14, 2022 – The San Diego Symphony announced today its 2022 Conrad Prebys Summer Season of concerts at The Rady Shell at Jacobs Park, the orchestra’s new, captivating waterfront venue that opened August 2021. The exciting lineup marks the second official season at The Rady Shell, running June through the end of September, with additional programming planned through the end of 2022 — including its annual Día de los Muertos concert and holiday concerts returning December 2022. From classical concerts to Broadway, jazz, R&B, film and rock, the programmatically-diverse season will highlight the city’s world-class orchestra, showcase some of the world’s top musical talents, and further establish the venue as a vital music destination for the region.

“Opening our long-awaited venue last summer — The Rady Shell at Jacobs Park — was an indescribable moment, and it marked a new chapter for the San Diego Symphony, community and region,” said Martha Gilmer, San Diego Symphony CEO. “As we approach the 2022 Conrad Prebys Summer Season, we are ecstatic to be able to bring together Rafael Payare and the San Diego Symphony with magnificent guest artists across many musical genres, from Joyce Yang to Common, as well as Boyz II Men and Jennifer Hudson. The 2022 summer season will have more concerts than in any previous year. We can’t wait to welcome our public back to our amazing venue this June — a special place where there is truly something for everyone.”

On the heels of launching a landmark venue, the San Diego Symphony’s outdoor season at The Rady Shell at Jacobs Park will kick off June 24 with Rafael Payare conducting the orchestra in a West Coast premiere piano concerto by Venezuelan American composer Reinaldo Moya featuring GRAMMY®-nominated pianist Joyce Yang and Mussorgsky’s Pictures at an Exhibition. The weekend will continue June 25 with R&B icons Boyz II Men alongside the San Diego Symphony, conducted by Christopher Dragon and will conclude on June 26 with Straight, No Chaser: The Music of Thelonious Monk featuring Gilbert Castellanos.

“Making music at our new, iconic outdoor home is profoundly joyous and powerful,” said Rafael Payare, San Diego Symphony Music Director. “This year marks the venue’s first full season of programming, and we have some incredible works in store—from long-standing traditions of the Tchaikovsky 1812 Spectacular and Beethoven by the Bay, to performances with wonderful artists like Jennifer Hudson, as well as Flying Lotus and Hiatus Kaiyote. The momentum continues for our city and orchestra, the possibilities are endless!”

Classical Works
Enjoy the sounds of Beethoven while taking in a sunset on the San Diego Bay with the Symphony’s summer favorite Beethoven by the Bay conducted by Edo De Waart (July 15). A program titled Philharmonia Fantastique (August 5) will feature a dynamic program including Valerie Coleman’s Umoja—Anthem of Unity, Bernstein’s Symphonic Dances from West Side Story, and two works by composer and DJ Mason Bates: his Soundcheck in C Major—the first work performed at the Opening Night Celebration of The Rady Shell at Jacobs Park in 2021, specifically commissioned for the Symphony and the venue—and Philharmonia Fantastique: The Making of an Orchestra, which features dazzling visuals. Audiences will revel in Music Director Rafael Payare leading the Orchestra in the 1812 Tchaikovsky Spectacular (Aug. 26), featuring works by Tchaikovsky including Francesca da Rimini and the 1812 Overture.

Movies by the Bay
As part of its film series, the San Diego Symphony will perform a variety of magical movie scores live, while the entire film plays on-screen in high definition. Marvel Studios’ global sensation and cultural phenomenon Black Panther In Concert will be shown, performed by the Orchestra and conducted by Anthony Parnther (July 1). Other notable movies include the timeless classic Toy Story In Concert conducted by Susie Benchasil Seiter (July 2); two evenings of Harry Potter and The Deathly Hallows™ – Part 1 In Concert conducted by John Jesensky (July 29 and July 30); and romantic tale The Princess Bride In Concert conducted by David Newman (August 12).

Holiday Traditions
Programming at The Rady Shell at Jacobs Park will continue throughout October, November and December, including a special Día de los Muertos (October 30) performance, in addition to its beloved holiday programming in the month of December. This 2022 season will mark only the second time in the Symphony’s history that its holiday programming — including San Diego’s long-standing tradition Noel Noel—will be held outdoors, in a beautiful setting along the Embarcadero. The full holiday season lineup will be announced at a later date.

For the full season of concerts, visit http://www.TheShell.org.

Ticketing and Pricing
Subscription packages for the 2022 season are currently on sale, and include Friday, Saturday and Sunday packages, as well as weekday packages and a jazz package. Single tickets for subscription concerts go on sale May while single tickets for special events go on sale April 12. Tickets range from $20-$270 based on seat location and artist (prices subject to change). To view or purchase subscription packages, visit http://www.TheShell.org or call the ticket office at 619-235-0804.

In addition to concerts the Symphony is presenting, there are a number of rental concerts at The Rady Shell including Olivia Rodrigo, Leon Bridges, Ben Platt, Norah Jones, Los Van Van, and more. Capacity for rental concerts expands to 8,500.

Food & Beverage
The Rady Shell at Jacobs Park’s culinary program, The Shell Provisions, offers an impressive range of local specialties in partnership with some of the city’s most popular purveyors including celebrity Chef Richard Blais, URBAN KITCHEN Group, Biga, Lola55, Achilles Coffee Roasters and more. In addition to top-notch food and beverage selections, The Shell Provisions at the Prebys Plaza Dining Pavilion and Market boasts new state-of-the-art kitchens and incredible dining spaces, allowing concertgoers to enjoy some of the best tastes San Diego has to offer, while taking in the beautiful sights and sounds of the city.

Additional programming to be announced at a later date. Most concerts for the 2022 season begin at 7:30 p.m., but start times will be indicated online.

About The Rady Shell at Jacobs Park
The centerpiece of the 3.7-acre public Jacobs Park developed and managed by the San Diego Symphony on the city’s scenic Embarcadero, The Rady Shell is the first permanent outdoor venue in the San Diego Symphony’s century-long history, designed to host more than 100 concerts and events year-round. The venue has been developed in partnership with the Unified Port of San Diego with 96% of the $85 million cost raised privately by the Symphony. As innovative in design as it is spectacular in setting, offering 360 degrees of year-round music, sky and sea, The Rady Shell at Jacobs Park is an unprecedented resource for the Symphony’s expanded schedule of diverse outdoor concerts, including classical concerts and an exciting roster of commissioned works and premieres programmed by San Diego Symphony Music Director Rafael Payare as well as performances by international touring artists and free programs. The venue will be available year-round for non-profit community groups, schools and individuals. Jacobs Park, owned and managed by the Symphony, surrounds the performance space with walkways, dining pavilions and recreational facilities in the heart of the Embarcadero and is accessible to the public for free on most days of the year. For more information, visit http://www.theshell.org.