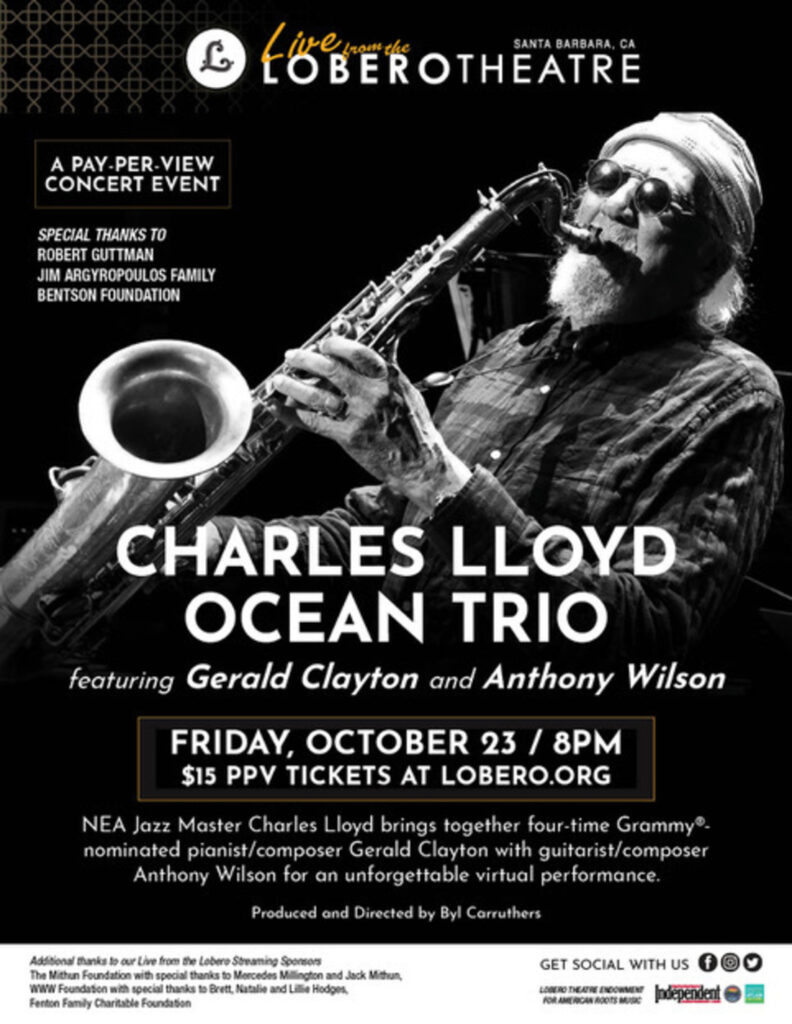 Live From the Lobero Presents
A Pay-Per-View Performance by the Charles Lloyd Ocean Trio featuring Gerald Clayton and Anthony Wilson on Friday, October 23

On Friday, October 23 Santa Barbara’s historic Lobero Theatre will host an exclusive pay-per-view performance by the Charles Lloyd Ocean Trio featuring Gerald Clayton and Anthony Wilson. The live streamed performance is the third installment in the Lobero’s series of specially-priced, live streamed concerts and follows up successful shows with Kenny Loggins and KT Tunstall. The performance will take place without an audience, with strict safety and COVID-19 sanitation protocols in place.

Charles Lloyd Promo Live from the Lobero from Lobero Theatre on Vimeo.

Tickets for the Charles Lloyd Ocean Trio live stream concert are $15 and are available now at The Lobero Theatre’s Website. The viewing window for the show will begin at 8pm PST on October 23. Ticketholders will be able to view the concert using Vimeo anytime within 72 hours after the show. Those who are able to make a donation to support the live music experience at the Lobero Theatre and others venues around the country are welcome to contribute more when they purchase their tickets. Proceeds from the show will go towards supporting the Lobero Theatre and a donation will be made to NIVA, the National Independent Venue Association.

At 82 when most individuals are thinking of ways to slow down and kick back, Charles Lloyd, an NEA Jazz Master, recipient of the prestigious French honor of the “Ordre de Chevalier des Arts et des Lettres,” and Memphis Music Hall of Fame inductee keeps shifting to a higher gear. His concerts and recordings are events of pristine beauty and elegance, full of intensely felt emotion and passion that touches deep inside the heart.

This not entertainment, but the powerful uncorrupted expression of beauty through music. When music vibrates, the soul vibrates and touches the spirit within. The critical consensus is that Lloyd has never sounded better. As Peter Watrous of The New York Times says, “Mr. Lloyd has come up with a strange and beautiful distillation of the American experience, part abandoned and wild, part immensely controlled and sophisticated.”

Credited by many with anticipating the World Music movement by incorporating cadences of many cultures in his compositions as early as the late 1950s, Charles Lloyd describes his music as having always “danced on many shores.” From the moment he first came to prominence as the young music director of the Chico Hamilton Quintet in 1960, Lloyd began to take audiences on journeys that traversed enormous distances.

Over nearly four decades, his compositions have punctuated the post-bop period, embraced the traditional music of a host of world cultures and ciphered the psychedelic 1960s with avant-garde improvisation. Lloyd was one of the first jazz artists to sell a million copies of a recording (Forest Flower) and then he surprised us by walking away from performing just at the point that he was dubbed a jazz superstar. Actually he was just following a trajectory that was taking him closer to the essence of the music he was hearing.

For the upcoming concert at the Lobero Theatre, Charles Lloyd will be accompanied by Gerald Clayton and Anthony Wilson performing as The Ocean Trio. Gerald Clayton is a four-time Grammy-nominated pianist and composer who has served as Musical Director of the Monterey Jazz Festival On Tour and has performed and recorded with Roy Hargrove, Diana Krall, Gretchen Parlato, the Clayton Brothers Quintet and many more. This summer he released his acclaimed album Happening: Live At The Village Vanguard via Blue Note Records. Guitarist and composer, Anthony Wilson, is known for a body of work that moves fluidly across genres. The son of legendary jazz trumpeter and bandleader Gerald Wilson, his musical lineage has deeply influenced his creative trajectory, compositional choices, instrumental groupings, and the wide-ranging twelve album discography that blooms out of them. Over the past two decades, Wilson has joined jazz masters and pop legends on their recordings and performances, including Diana Krall, Mose Allison, Bobby Hutcherson, Madeleine Peyroux, Al Jarreau, Paul McCartney, Willie Nelson and Barbra Streisand.

The Lobero Theatre is one of the oldest theaters in the country. For almost 150 years, the Lobero has featured some of the world’s greatest artists. Since closing its doors to limit the spread of COVID-19, the Lobero has lost over $1 million in critical earned income. Like every theater, nightclub, and performing arts center in America, the Lobero faces an uncertain future. When ultimately allowed to reopen, the Lobero and others will need to survive with reduced occupancy, in order to safely social distance. A great many venues are likely to disappear, before ever getting back to live audience.

The Lobero’s safety-centric production model involves a forensically small crew using various assigned entrances. In addition to PPE, temperature, and symptom checks while entering the building, all crew members will bring their own food and remain in their specific space for the entire production. Some of the technicians perform their tasks from individual rooms. Others never come within 15 feet of the artists. They are only to leave their room, or position, to use one of the eight assigned bathrooms and stalls.

After set-up, the day before show day, the stage, doors, hallways, and rooms, will all be disinfected to meet COVID-19 sanitation guidelines. On show day, no one other than the artists walks on to the performance stage. Artists arrive through stage doors and take their place on-stage, perform, and exit, without making any contact with the crew.